HallyuPopFest London 2022 Day Two: The Biggest K-Pop Festival In The UK Closes With A Bang

Day Two of HallyuPopFest 2022 in London was just as energetic, entertaining and electric as promised, with more beloved stars performing some of K-Pop's best tunes. Check out our review and some red carpet photos!
Written by
Aimée KwanJuly 10, 2022 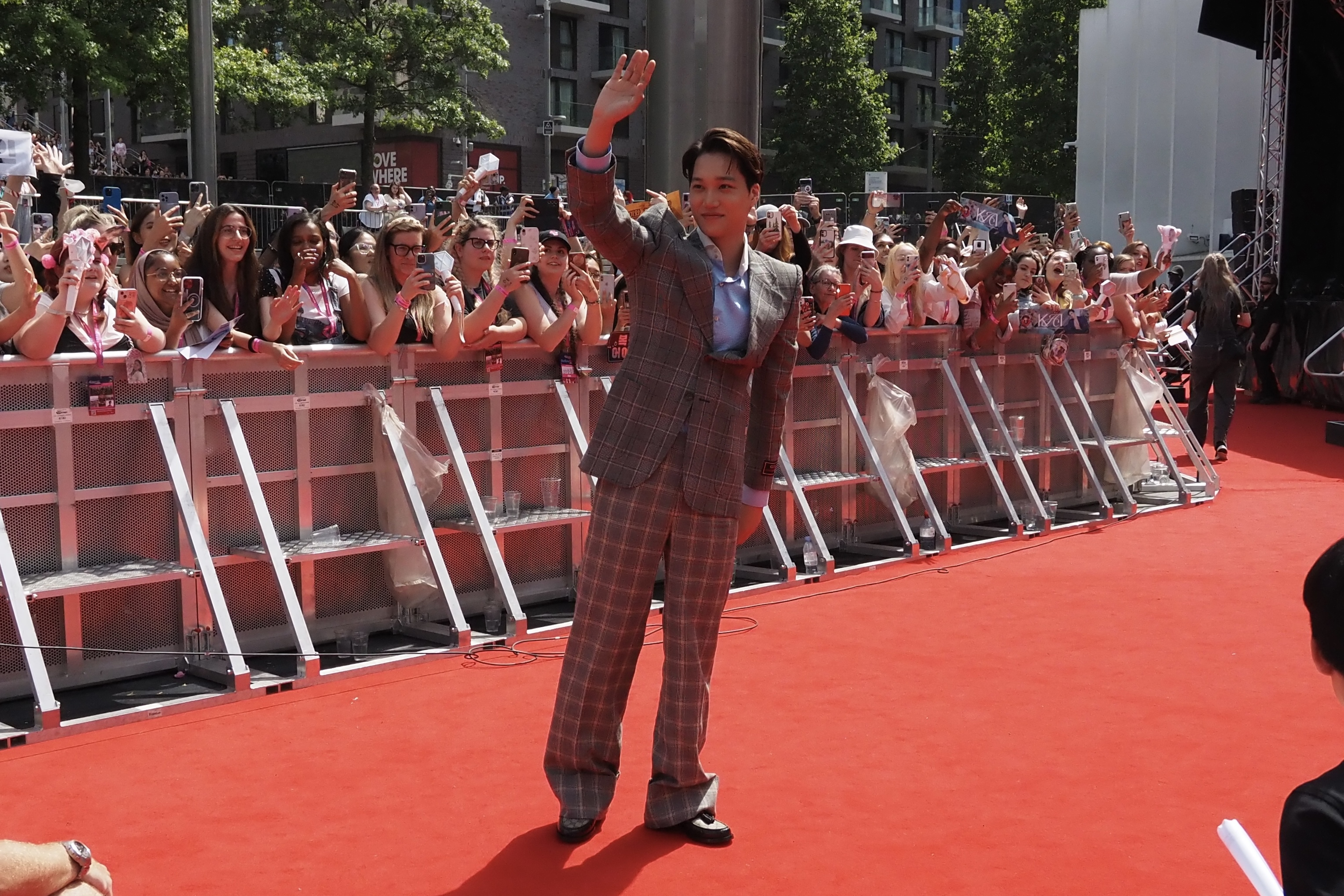 The second day of the biggest K-Pop festival ever seen in the UK saw a whole new plethora of stars take to the red carpet and the stage, lighting up the Wembley OVO Arena for one more night.

Paul Kim and Weeekly featured as Sunday's Showcase Stage artists, with girl-group Weeekly providing spades of energy during both their Showcase Stage and the evening concert via a diverse setlist that showed off the best of their discography, from 'After School' to 'Ven para' and 'Solar'. Between songs the group participated in a random dance cover bingo that showcased the group's dance skills and charisma; judging by the cheers of the crowd when the group returned for the evening concert, Weeekly won over many new fans through their larger-than-life personalities and bright, vibrant performances.

Crooner Paul Kim was a contender for most endearing artist of the evening, and charmed the crowd from beginning to end. 'Me After You', 'Every Day, Every Moment' and 'Coffee With Me' were some of the songs on offer across the Showcase Stage and the evening concert, yet concergoers were not just treated to the singer's dulcet tones but also his close interactions with the crowd. He serenaded one fan with a rendition of 'The Christmas Song', and to much delight also indulged in flexing some British slang, throwing out words such as 'chuffed' and 'peng' (with the latter used multiple times). Although he kicked off the evening concert he was one of the highlights of the night, and hopefully he returns to the UK much more in future.

Out on their first ever European performance since their 2020 debut was CRAVITY, with the group taking the audience through a non-stop tour of their biggest hits and high-octane b-sides. Starting their set with one of their best title tracks to date, 'Adrenaline', they also played fan favourites such as 'Bad Habits' and 'Mammoth' as well as a beloved b-side from their debut album, 'JUMPER'. It was a fantastically energetic set that showed off the stage presence and performance skills of the group, especially when it came to how perfectly synchronised all nine members are when it comes to their intricate choreographies.

Five-member boy group CIX brought undeniable chill-pop and dance-pop goodness to the Wembley OVO Arena, with 'Bad Dream', 'Cinema' and 'Movie Star' some of the great songs the group served to the crowd from their six track setlist. With the great variety of tracks picked in the group's setlist, they managed to show the true depth of all the musical colours that exist in their discography, and the group will surely be leaving London with many new fans after the cool and passionate performances they showcased.

Some of the biggest cheers of the night were reserved for nine-member girl group Kep1er, who wasted no time in busting out two of their biggest hits from their debut album, title track 'WA DA DA' and 'MVSK'. B-side 'LE VOYA9E' also got a showing, and the group performed with the confidence and precision of a group that had been around for many years. In the seven months since the group's debut, they have built up a formidable following and fans were on their feet as they wrapped up their set with a performance of newest title track 'Up!'. If the reaction of the crowd was any indicator, Kep1er can't return to UK shores soon enough.

SF9 brought nothing short of fantastic energy and skill to the stage, with a set that included much loved songs such as 'Good Guy', 'Play Hard' and 'Love Again'. It was a six track setlist that had the crowd up and dancing in some moments, and swaying with their hands in the air at others. The group overcame music issues at the beginning of their set to pull off a confident and earnest performance that displayed to a raucous crowd just why they have cultivated such a devoted and loyal global following over the years.

The one and only Kai from EXO wrapped up proceedings with a setlist that took the crowd from hit to hit, kicking off with latest title track 'Peaches', and ending with the title track from his debut EP, 'Mmmh'. Fans were also treated to flawless and slick performances of other beloved songs 'Vanilla', 'Hello Stranger' and more, with the six-song setlist only punctuated with a small moment when Kai needed to dash off-stage to sort out some difficulties with his outfit. That the EXO member has charisma and star-power in spades was never in any doubt, but his stages in London brought to the fore the full extent of his abilities as a dancer and performer; the perfect act to close a night of brilliant performances.

HallyuPopFest London 2022 was promised to be a wonderful and unmissable experience for K-Pop fans around the world, and all fourteen acts across both days brought their A-game to give ticket holders two unforgettable nights in at the Wembley OVO Arena. The mixture of selected acts not just brought in swathes of fans from around the world, but also showcased the large amount of sonic diversity within the genre. Fans cheered for every single act that graced the stage, and the farewells from all the artists together at the end of each night displayed just how much love there exists between artists and fans throughout K-Pop.

The Wembley area in general was a great pick for such a large festival, with the area's shopping and food options complementing the weekend's HallyuTown setup that exhibited some of the most promising products and brands coming out of South Korea. Fans could be seen congregating in pockets in both HallyuTown and throughout the area, with banners, CDs and photos being exchanged between attendees. The energy throughout the festival was wonderful, with a generally excited, happy and optimistic buzz everywhere the entire weekend.

In the past, HallyuPopFest has managed to bring the best of K-Pop to fans in different cities around the world, yet HallyuPopFest London 2022 was the first time it had come to Europe. Despite the baking hot London sun this past weekend, with all the great performances, fan interactions and more, the festival can surely be considered a great success.

HallyuPopFest can be found on Instagram and Twitter, and is set to come to Sydney, Australia, later this year. Check out our coverage of Day One here.