My Story: Narmadha Kothandapani & Finding My Voice in Carnatic Music

&ASIAN’s ‘My Story’ series gives writers and contributors the chance to tell us about their lives and personal experiences with honesty and candour. In this week's piece, friend of the site Narmadha Kothandapani talks about her upbringing, Tamil musical influences, and how she still connects with her culture today.
Written by
Narmdha KothandapaniJuly 27, 2021 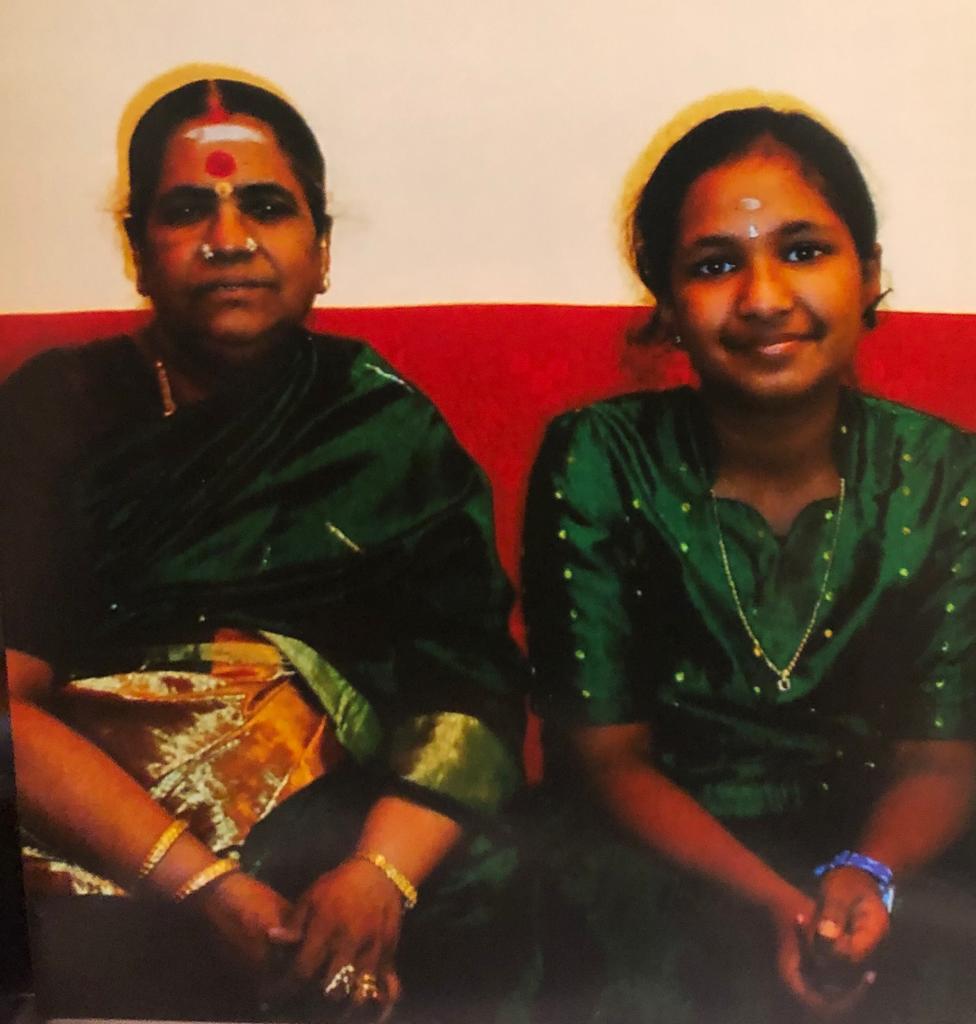 Hi, my name is Narmadha and I'm born and brought up in London. My mum is Sri Lankan and my dad is Indian. Their spoken language is Tamil, my mum and dad both speak Tamil. There is a slight difference between the Tamil my mum speaks and the Tamil my dad and my dad's side speak. That is Indian Tamil, which they speak in the south of India. My Tamil identity is incredibly important to me.

My mom is a vocalist and my dad is a musician. So he can sing but also he's a violinist and they are both teachers. They teach children in the UK, but they started off as performers. Because of them, I was involved with the music side growing up.

So I was involved with my dad's orchestra and my dad has a music school. I would always partake in a lot of the activities which took place and help with student examination times. For me, it's still the case today. I still help with a lot of the things that my dad does with them on the music side. For me, that is still being part of it and being connected to my culture...Indian classical music, which is carnatic music. That is what I've grown up with.

I've lived my life living with my mum and she is a singing teacher. So at home, I was very much surrounded by traditional songs, classical songs, devotional songs, and [through] her just teaching the students, I would hear that a lot at home. So I was almost subconsciously learning all these songs and I felt very connected to my culture, just learning the music and being surrounded by music.

I also learned traditional Tamil devotional songs, that type of thing is called Pannisai. They're a very different category of Tamil songs, and they're very special because not many people know how to sing them. They're sung at performances, but also they're sung at prayer times. It was something that I did growing up, I used to sing during prayer times when I [went] to the temple on Fridays.

Also I was very involved with the competitions that took place for children and young people, and they would take place around the UK. So I would enter these competitions and I did win prizes for them. I hold a great sense of pride learning these traditional songs that are sung in Tamil.

It's one of those things you don't forget to this day, I can still remember those songs and almost like learning how to swim you can never forget them. They will always stay with me forever and hopefully [I will teach] my children one day because they're incredibly important to my heritage and my culture.

It was a big, significant change for me when I moved out. I've been living with my mum since I was very small. For me it was just being at home... I was surrounded by cultural events that took place within the year. My mum... she very much was always keeping an eye on the Tamil calendar and specific events which took place in that year and spiritual days.

For example, we have a festival called Pongal where it's a harvest festival and she would make the sort of rice that you have to allow to pour, and it's a sign of wealth and bringing you wealth and happiness for that year ahead. It's those kinds of things that I do miss, once I moved out and the one thing that I did find during lockdown I just was striving to make more home food. So I got loads of recipes from my mom and my cousin and started making traditional food at home for me and my partner and had a great sense of pride in making those meals. I felt like I was more connected to home... more than ever in a time where we were isolating.

Another thing I did when we moved is I made sure that I put the pictures of the Hindu gods in our house, and that's another thing that I felt was greatly important. I felt that it was important that I did that because I felt that my culture and devotion was deeply embedded from a young age.

Being at home with my mom, we grew up going to the temple every Friday. Also I started going on Saturdays, because I would go to learn my music lessons. So going to the temple was a big part of my upbringing, fundamentally. Learning about my culture and being a Hindu as well.

Sri Lanka is a big part of my identity. Though, when I was younger, I was not very much aware of the issues that were happening in Sri Lanka, and that was the massive civil war that was happening. It started in the 80s, and it was just before... I mean, my mum actually came to the UK before the civil war happened. One thing was that the lack of communication that was taking place at the time, but we weren't actually aware of a lot of the things that were going on. But we did know that it was just a very horrific time.

I felt that when I was little, I didn't know much about what was going on; and then the [2005] tsunami happened. My aunts - I have a few people in the family who are doctors - so they went out to help out in the humanitarian crisis in Sri Lanka and help others who were injured. During that time, there was a sort of silence in the war as they were trying to deal with the disruption of the tsunami. Shortly after that, things started to pick up and we got to about 2009, and that's when things hit the peak of the civil war.

It was an incredibly distressing time because a lot of the oppression of Tamils was significantly higher than it's ever been. It was a very sad time. One specific event which stood out was the massive, massive protests that were taking place in London. And I did go to one of them, and the turnout was massive. I hold a great sense of pride that day... that so many people in my community that I knew attended, and it was incredibly moving, and empowering to see people standing up for what is right and for things that were being silenced in Sri Lanka.

I think things are pretty much still the same. I think the oppression is still happening there, even though the civil war has ended. And I think that's one thing that is more… it is still suppressed. It is sad, but I think it's also important that we have those conversations, and I think especially in today's society, we're having the younger generation who are speaking out for these kinds of issues and hold a deep sense of pride for the future generation who are speaking out for things like this, and actually bringing the attention to the world about these kinds of issues. The important thing is just to continue to have those discussions: that's the only way to really try and make a difference for those kinds of issues happening in Sri Lanka.

She's even taught us recipes as well: I am trying to learn how to do [them]! She always tells us stories about her upbringing - she was brought up in a small village in India, in South India. She always talks to us about how she was brought up. Just being able to listen to her stories, and also learning more about my late grandfather, I find that incredibly touching and moving just to understand more about how they lived.

I feel that keeps me connected with my culture and upbringing, and I think that that's something that I would teach my children in the future. I think that it's incredibly important for them to understand their heritage as well.

So I think it would be important for them to learn Tamil - in the same way that I have a younger brother and he's learning sort of basic Tamil at the moment. That's the kind of thing that I would also want for my children and future generations.

Have a story you wish to share? Send us your story at mystory@andasian.com