In the third record released by the boy group this year, they shift from the glittering tech world into a soundscape that brings together modern and traditional Korean culture.
Written by
Aimée KwanNovember 9, 2021 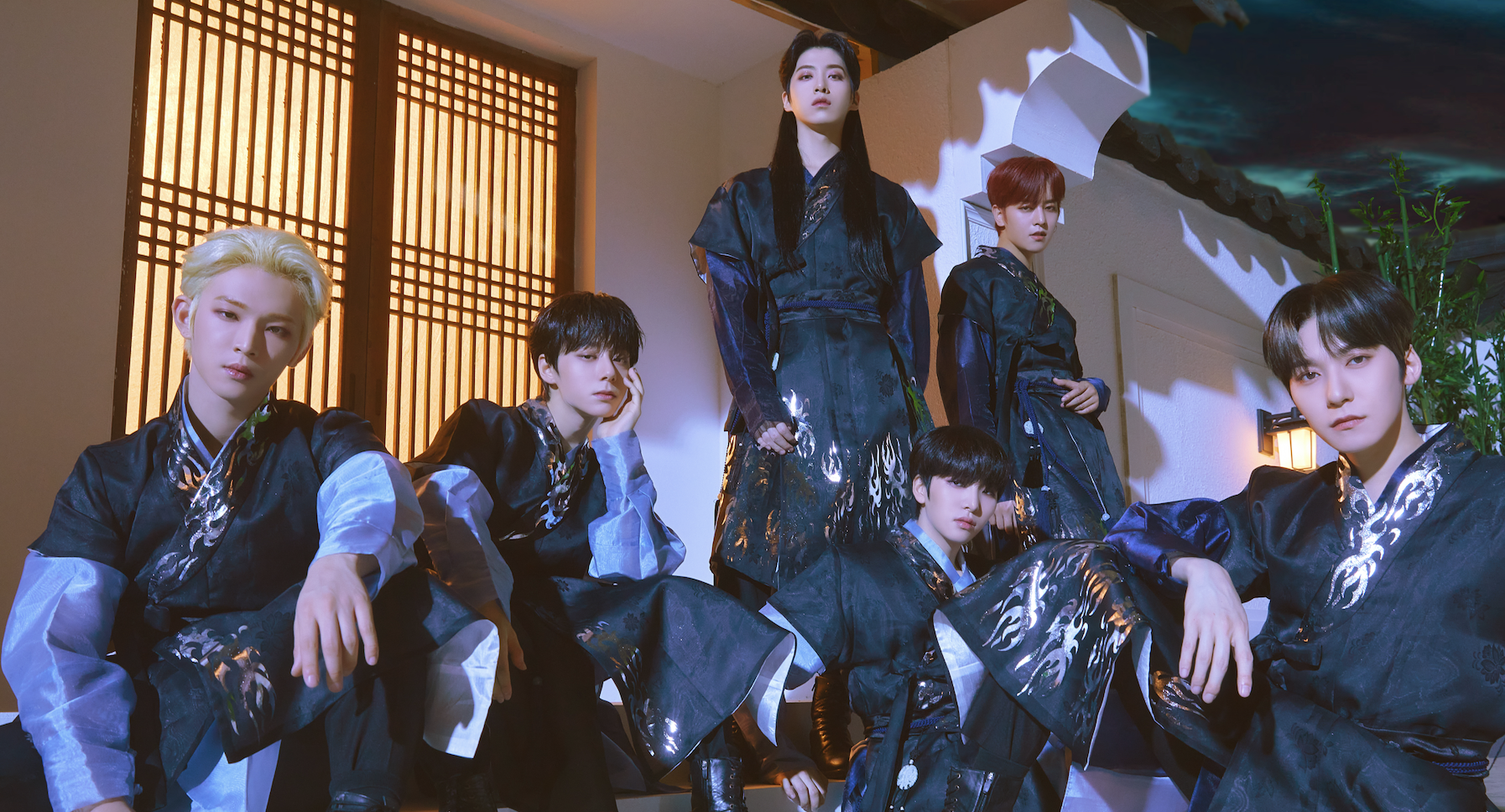 At the beginning of 2021, six-member boy group ONEUS released the record DEVIL, a strong LPthat saw them take on the mantle of punk-esque pop rebels through title track ‘No Diggity’. A few months later, they returned in a completely different guise with BINARY CODE, where they accompanied a tech-groove banger of a song with Michael Jackson inspired disco moves. In their newest record BLOOD MOON they’ve come back with yet another completely different concept within eleven months.

Both fans of ONEUS (also known as Tomoon) and casual followers have long reflected on the fact that the group stands out through the way they bring intricately theatrical elements to every performance: it’s not unusual to feel that the group have somehow managed to put on a mini-movie every time they take the stage, and it should come as no surprise that they have decided to tell another brand new story in BLOOD MOON.

Infusing traditional Korean music and culture all they way through their newest title track ‘LUNA’, the music video for the pop song sees the group dance amidst traditional Korean settings, and with beautiful shots throughout, it is possibly the group’s most elegant and cinematic music video yet. The instrumental on the track is as equally beautiful: the use of Korean traditional instruments seamlessly woven alongside modern production make the song easily one of the most satisfying and enjoyable musical moments of the year.

When listened to after opening track ‘Intro : Window (Feat. Choi Ye Lim)’, ‘LUNA’ becomes even more rewarding, for within the first few seconds of hearing Choi Ye Lim’s operatic voice ringing out like a herald we’re left with no doubt that BLOOD MOON is going to be a completely different beast of a record to any the group has put out before. It sets up a theatrical tone that runs through the rest of the album, as well as reinforcing the balance between modern and traditional. Some intros are merely an interesting aside on an album, on BLOOD MOON, ‘Intro : Window’ is one of the album’s highlights.

2021 also saw the group return to their ONEUS THEATRE project, where they put out music videos to two other songs: ‘Shut Up ‘ and ‘Life is Beautiful’ before BLOOD MOON’s release. Both are very different songs — one a hardcore pop track, the other a light and breezy comforting anthem — they feature again on the new record’s tracklist. Both could have been made title tracks (indeed, it’s fitting that they’ve had their moments in the sun with individual releases) and are strong inclusions in the tracklist that continue to enforce the soundtrack-like feel to the album.

A reminder of ONEUS’ great vocals can be seen in ‘Who You Are’ as well as ‘We’re in Love’. These songs are on the slower side, with the former an R&B track, and the latter a pop ballad in the vien of other ONEUS ballads such as ‘I.P.U.’. Summer also shines through the album for a moment in ‘Yes or No’, which is an upbeat pop song with a fun horn line peppering the chorus that can’t help but get you smiling.

In their three-year career ONEUS have only put out one full-length album, whilst by comparison, they’ve released six mini albums and one single album. So many records released means they’ve been able to quickly shift between completely different concepts and storylines a year. This is by no means a bad thing, though in the hands of artists with less conviction such a strategy might not necessarily work, for it may appear as though they can’t quite decide what concepts or ideas they wish to present.

Yet, especially in their most recent records, ONEUS seems to have taken such complete and constant transformations in their stride. In their hands — the hands of performers that shift so easily from one concept to another — each album instead comes across as an exploration into a completely different world or storyline, perhaps akin to an author or film director choosing to put their skills towards mastering a different genre every release.

BLOOD MOON is a record that will be remembered for its beautiful musical and performance concepts above all else, but it also stands testatement to ONEUS locking down their claim to be the master chameleons of K-Pop. They’ve grown into this title over time, and through three completely different transformations in 2021 we can see how they have come to own this completely. Thus, it’s arguably essential to witness their performance stages alongside the release of every new album: to not do so is to miss out on a significant element of what makes ONEUS’ artistry so interesting. They don’t just try out a new concept or theme, they embody it completely before moving onto something completely different with just as much conviction.

It is all we can do to revel in their ability to world shift so deftly, and to wait, with bated breath, to see where they might take us next.