ONEWE Round Off The Year With Soaring Ballad ‘STAR’

The five-piece band return once more with another glittering track released just in time for Christmas.
Written by
Aimée KwanNovember 23, 2021 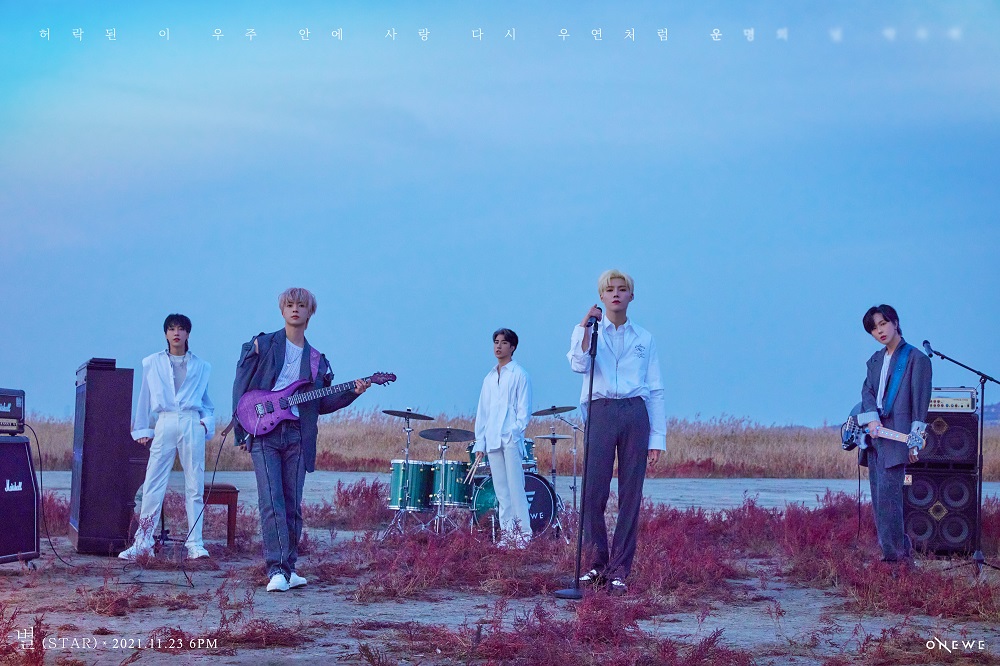 ONEWE for 'STAR'. Photo: RBW.
Now Reading:
ONEWE Round Off The Year With Soaring Ballad ‘STAR’

When I reach you
Chasing the constellation
A new destiny spreads…

Chasing so many stars
I remember you in the night sky

ONEWE have had a quietly monumental 2021 so far: their last album Planet Nine : Alter Ego, released in June, hit record sales for the band (GAON) whilst also being the best body of work the band has ever put out. They’ve remained relatively low-key despite their steady growth, leaving fans (also called Weve) wondering if they would grace us with any more music before the end of the year.

The band is no stranger to mega-singles, with previous singles ‘Parting’ and ‘A book in Memory’ standing out as some of the best ballads in their discography. In newest single ‘STAR 별’ the group choose to go for more of this signature, cosmic-inspired, romantic sound.

It’s a cinematic offering that sees an initially light and gentle instrumental build up into a soaring chorus accompanied by strings and twinkling, bell-like percussion. One can’t help but hear the stars — or at the very least, think of Christmas — throughout the song. After all, Christmas is the season for big, sweeping ballads with a hint of orchestra, and here, ‘STAR 별’ delivers.

However, the lyrics are not Christmas-focused at all (unsurprisingly), and instead tells the story of someone thinking of a loved one they wish to escape with, with the image of ‘the star’ representing a place in time and space where they can finally be together. The way the band plays with cosmic and fantastical concepts always adds a rich and visually evocative aspect to their music, and in ‘STAR 별’ this similarly adds another layer of depth to an already vivid ballad.

‘STAR 별’ is ultimately another beautiful track in the band’s discography and a reminder that the world is always a little more romantic, or at the very least, a little more escapist when a ONEWE track is on. Yet what is also interesting about the song is the promise that it holds for the upcoming January 2022 album that the group also announced during the single’s promotions. ‘STAR’ will be included as part of the group’s STUDIO WE: RECORDING #2 demo album, which will probably be just as fascinating as the group’s first demo album STUDIO WE: RECORDING, through the insight it gave us when it came to the band’s creative process.

However, if ‘STAR’ is any indicator, the successor to Planet Nine : Alter Ego — currently teased as Planet Nine: ??? — will be another step upwards in the group’s rise towards the stars. Bring on January 2022.

STAR 별 is out now. ONEWE can be found on Twitter, Instagram and all music and streaming platforms. All lyrics from Genius English Translations.