Bruce Kuei and Benjamin Su have a slew of impressive Pixar credits between them: from Bruce's work on Coco, Up and Inside Out to the cover art Benjamin does for Marvel Comics alongside his Pixar work. The two of them sit down with &ASIAN to chat about their work on Pixar's newest movie 'Turning Red', their favorite moments from the film, and more.
Written by
Aimée KwanMarch 10, 2022 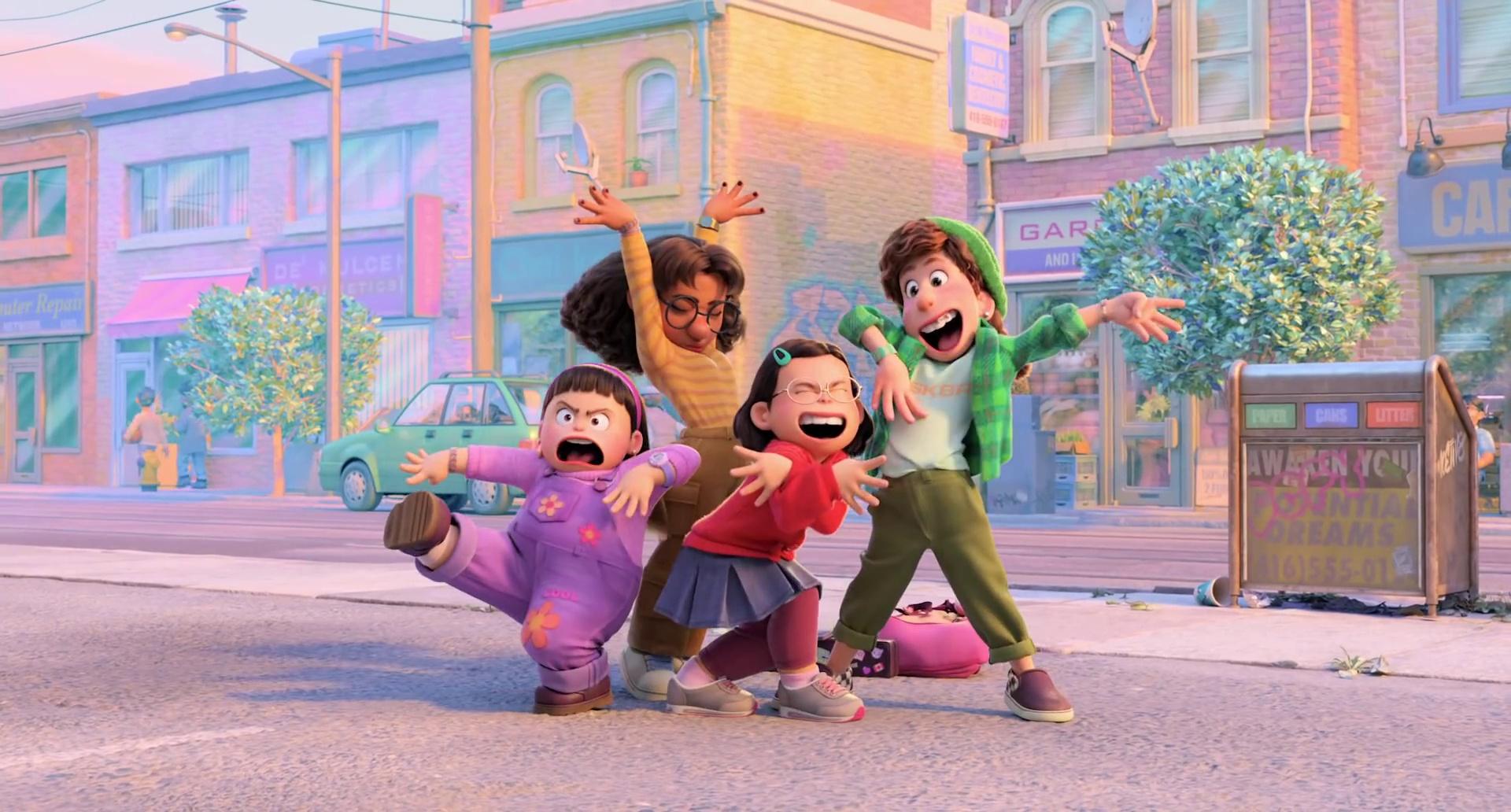 Hi, Benjamin! Hi, Bruce! thanks so much for chatting to me today and thanks for being a part of such a wonderful movie.

I'm not gonna lie, I openly wept when I watched it the other day; it must be amazing knowing that like the work you've done is going to have such a profound impact on audiences.

Benjamin Su: I appreciate that.

For our readers that might not understand the intricacies of animation, what is it that both of you do? How would you both describe your roles in this movie?

BS: We're animators on this on this project; so essentially, animators are actors. We create the performance or we bring the characters to life. We do the expressions, the lip sync as well. And the process is that a lot of times animators will actually film themselves acting out the shots in the movie, and then we will take those as references. We'll try to use that and put that into the characters on the computer.

How does that work alongside the other visual artists involved in the film as well?

BK: I would say the story artists, they will make storyboards that kind of give kind of like a feel... like a first pass on what the movie will look like. Then when we animators go in, we kind of fill in the details and we do the exact facial expressions, the exact movements that make it to make it look real, basically.

Ben, do you have anything you'd like to add to that?

How did you both get involved with the movie?

BK: Oh, god. Okay. So for me, I remember when Domee first pitched the movie to the studio, and she showed, like, the first nine minutes I think, or the first... like, the beginning of the movie. She showed it to the whole studio and it was only in storyboards at that point. I remember watching it and just telling myself, I have to work on this movie.

So afterwards, I talked to the animation supervisors for Turning Red, and I was like, whatever you guys want me to do, you know, I'll do. And I was still on... I think, Soul (2020) at that point. But I was already doing like, sketches [for Turning Red]. I was showing them stuff I wanted to do with this movie... and afterwards, they put me on.

BS: So... I didn't get a chance to work on that. And in fact, my parents called me and told me how disappointed they were that I did not work on that film! You know, like "Pixar has an Asian character movie, and you didn't work on it?!" So I knew I had to work on this one. Also, just to please my parents.

Without spoiling anything, is there a moment in the movie you worked on that you can share with us?

So that when our readers watch it they'll know it's some of your work!

BS: I got to animate the sequence where we introduce Mei's (Rosalie Chiang) friends at the school for the very first time. That was really exciting, because every time a character is introduced, you want to make sure that their personalities shine immediately in that first scene. So it was exciting for me to work on that and bring that onto the screen.

BK: For me, there's a moment in this film - and this hopefully won't give anything away - where Ming (Sandra Oh), Mei's mom, kind of does a shudder like, like that (acts out shuddering). And my mom does that a lot. So when I animated that shot, I tried to you know... I kind of put a little bit of my mom in there. I told her about it she, and, you know, she's not too thrilled...

When she watches it she'll know that moment's all her!

What about your favourite moments?

BS: It always cracks me up when I see the scene where Mei has turned into a panda for the first time, walks into the bathroom, and then she sees herself in the mirror and freaks out. I just love that moment: cracks me up every time.

BK: There's a moment in which Mei is - and I don't think this shot is in the trailer, so I don't want to talk about it too much - but there's a moment where Mei is drawing some pictures. And she's kind of like giggling to herself, about the pictures that she's drawing. Just the the way that it's animated, the way that it's lit. Even the sound, the dialogue of her laughing... it just kills me every time.

BS: I think we could say she's drawing pictures of a boy. That's what makes it so funny as well.

Benjamin, you mentioned about how as animators, you'll act out moments for the characters.

Do different animators have different processes for this or is there a tried and trusted way that most animators use to create these character actions?

BS: Yeah, that's a great question. Each animator I feel has their own way of creating the performance. Some animators like to sketch out ideas on paper, they would like to draw out the poses on paper first, before putting it onto the computer.

Some animators would love to study films and actors and if there are certain actors that they feel connect to certain characters in the movie, they'll study those actors, and try to bring that performance over. And then there are animators that that will try to act like those characters and use that as a reference.

As a big animation fan something that I've always found really interesting is how when looking at the credits - whether that's for an animated TV show or for a movie - so many Asian animators, artists and storytellers seem to really thrive in the animation space.

I would love to hear your thoughts on why you think that's the case.

BS: I feel like there's always been a lot of, you know, Asian artists that are that are well known. I feel like because of social media now... you know, you can go on Instagram, YouTube, there's more visibility now for that. When I was in college, I found Cameron Miyazaki, who was one of the Asian animators at Pixar.

He had a blog, where he posted some of this Pixar animation and I remember seeing that and going, "Whoa, Asian people can do that. That's cool, at Pixar especially." That inspired me to work harder and submit my portfolio to Pixar. So yeah, I think I think having outlets like that now, I feel like it's definitely helped other people.

BK: Yeah, I would agree with Ben too. I feel like growing up, you know, just going into all these museums and seeing that like, art is just a part of everybody's life, regardless of culture... I remember going into the National Palace Museum and seeing, you know, stuff that people have made hundreds or thousands of years ago, and you're like, "Wow, this art... people feel this need to create."

I feel like maybe part of the reason why it's exploded recently is kind of like what Ben says: people seeing it on social media and people being exposed to it and being like, "Wow, this is something that's possible for me. This is a career that I can pursue." And as hopefully as people get more and more exposure to that, this is a possibility that we'll just get more people applying and doing art.

The message of this movie is going to inspire a lot of little kids around the world. It's such a universal message: being yourself and pursuing your passions.

For kids that want to follow in both your footsteps get into animation and want to get to work for these top studios, what advice would you want to give them?

BS: For me, it's always been, if this is truly something that you want to do, don't give up. Just keep working hard. Keep, you know, keep that sort of flame of passion going. Don't don't lose that.

There's going to be a lot of roadblocks along the way, including... my parents, too, were like a roadblock, funnily enough. They didn't really want me to do this. But I think sometimes you just have to be true to yourself. Just keep working hard at it if this is something you want to do.

BK: I think for me, it would be: study life. Because the job of artists, regardless of medium, regardless of whether you want to be, a graphic design artist or an animator or a story artist, we're all trying to portray life, but in our own way.

So if animation is your passion, or if just in general art is your passion, I'd say study life, study the world around you. See how people move, see how people... not even people, maybe just see how the light hits certain buildings and certain trees and what it looks like and filter it through yourself and and portray it to to the best of your ability, and create art that way and just keep keep pushing.

Turning Red will be out worldwide on 11th March, 2022. Check out the other interviews from our special Turning Red week here!