Bridgerton’s Simone Ashley Wants To Bring The Fun To Representation: “I never really imagined we’d ever be on a set one day performing a scene like that!”

Shondaland’s Bridgerton is back for a second season, and &ASIAN were invited to hear the cast and crew dish about representation, ‘earned’ sex scenes and difficult-to-work-with corgis.
Written by
Aarabi BaheerathanMarch 24, 2022 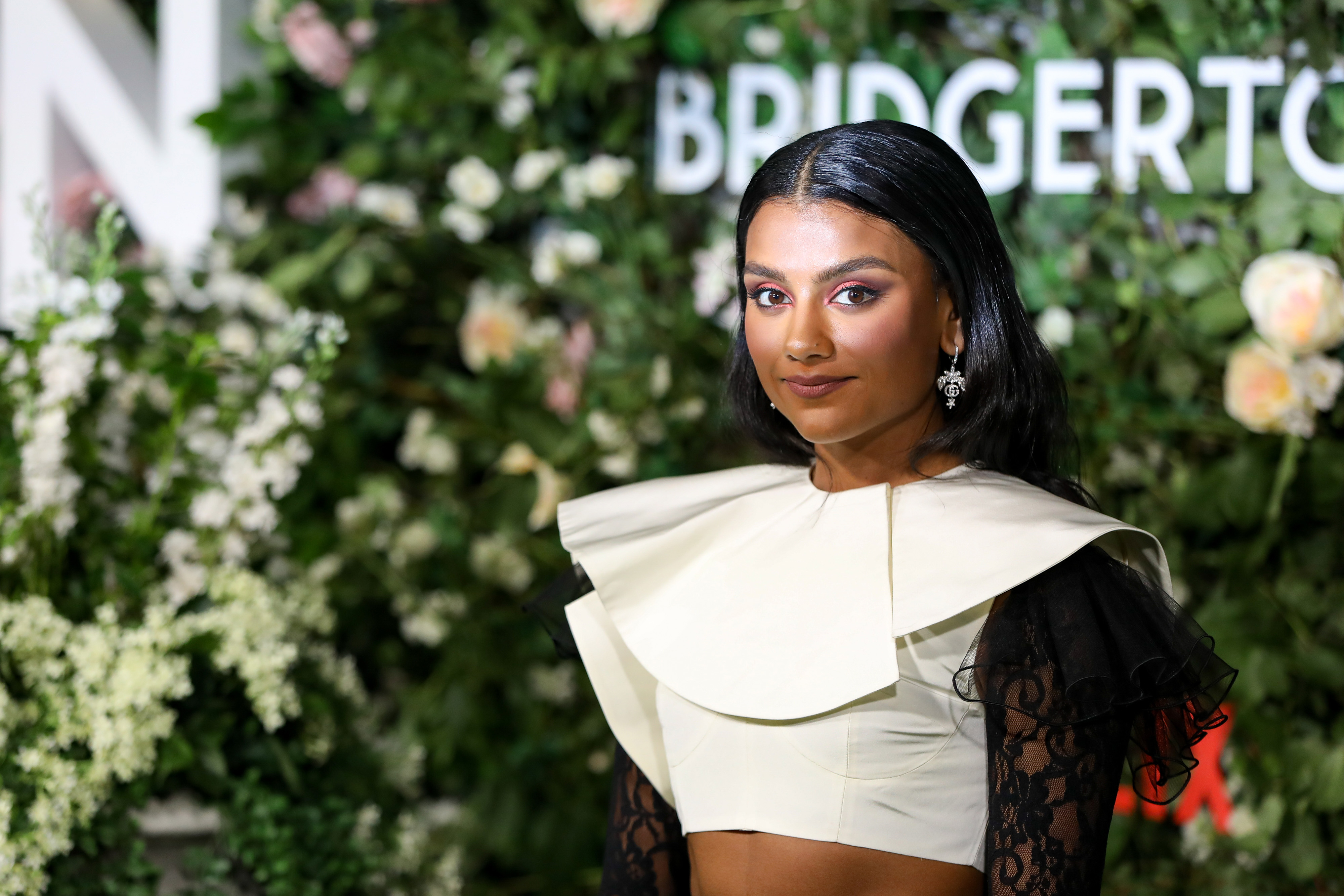 Simone Ashley at the Bridgerton Season 2 World Premiere on March 22nd 2022 at the Tate Modern. Photo courtesy of Netflix.
Now Reading:
Bridgerton’s Simone Ashley Wants To Bring The Fun To Representation: “I never really imagined we’d ever be on a set one day performing a scene like that!”

“Bridgerton has brought a joy to representing many different cultures.”

Speaking to &ASIAN and other press, Simone acknowledged that the conversation around representation is one that is complex and ever-evolving, but stated that she personally would like to bring joy, normality and fun to her representative role. Charithra and Simone mentioned how this joy and fun are brought about with the inclusion of a “Bollywood staple” in the soundtrack, referring to how an orchestral cover of Kabhi Khushi Kabhie Gham is featured at one point.

“I immediately paused, texted Chris saying this literally brought tears to my eyes,” Charithra commented on the moment she heard the track, “because it’s the collision of both of my worlds. When you’re growing up as immigrants’ children, sometimes it’s hard to figure out your identity. You sometimes don’t know where you belong. And that was one of those defining moments where you go ‘okay, I get it now. I can be both and I can do both.’”

“I think it’s wonderful that more South Asian women can identify themselves within these characters,” Simone added, describing how herself and Charithra used their own personal experiences to draw off of. Charithra reiterated this, asserting that she found the Sharmas fascinating as they are essentially immigrants, “they’re different, not because of their skin colour, but because they come from a different background, they have different customs. Then they’re sort of transplanted into London and they’re trying to fit in and be successful in that community.”

Charithra acknowledged that the younger generation feels a particular pressure to assimilate to whatever the popular culture is and hopes this can change that: “By having this representation, I hope that young girls, everyone that looks like us, feels like they don’t need to do that, and they can own that part of themselves.”

“It was so much fun, it was so special for me to kind of even have that creative conversation together. I never really imagined we’d ever be on a set one day, filming a scene like that.”

- Simone Ashley on the inclusion of a scene depicting a Haldi ceremony.

The Sharmas may receive an ambivalent welcome from the ton, but Simone and Charithra themselves had no problem settling in after joining the cast for Season 2. The first scene the pair filmed was a large group scene, so they met everyone all at once and had plenty of time to get to know them whilst waiting around.

From the press conference alone, it’s clear to see the cast genuinely get on well there is genuine warmth amongst them. When asked who the on-set clown is and who makes everyone laugh, the group fondly name Jonathan Bailey. He tells us that there’s always a playful sense of dread with the first laugh. “When the giggles start, it’s terrifying, it can go on for days."

“A lot of the show was edited in my basement."

Creator, executive producer and showrunner Chris Van Dusen admitted that his infant children were also unexpected key members of the crew. Due to the pandemic, much of the show was edited virtually in his basement. Despite the challenges of working at home with his 18 month-old twins and 4 year-old child running around, this proved to be beneficial to him: “I knew if they would dance to the orchestral pop songs that we were doing, then I knew that those songs were keepers.”

A portion of the event was dedicated to discussing the true star of the series, Kate’s beloved corgi Newton. The dog had earned itself a reputation for chewing on pebbles throughout shooting, with the real-life dog having as much of a personality as his fictional counterpart. “He has this innate sense of character and I just really look forward to seeing what he does next,” Bailey quipped.

“It was never about quantity for us. Our approach to intimacy really is the same as season one, and that’s that we use these intimate scenes to tell a story and to push a story forward. And we’ve never done a sex scene for the sake of doing a sex scene, and I don’t think we ever will. It all serves a larger purpose."

- Writer Chris Van Husen on the dialled down sexuality this season.

In response to the scepticism surrounding the series’ sudden lack of steaminess, Chris responded that the show would never include a performative sex scene, and that the priority remains the authentic telling of a love story. Simone Ashley echoed this sentiment, asserting that prevalent intimacy wouldn’t have been true to the characters, who have a strong familial sense of duty and responsibility and who wouldn’t naturally break away from that.

“The enemies to lovers trope is obviously one of the most enjoyable romantic tropes. And actually what is that, that’s about identifying something you don’t like about yourself in someone else, which means you have this similarity, which means it’s passionate, it’s complicated and it’s a shared identity… There’s more psychological nudity in this than literal.”

- Jonathan Bailey on the second season of Bridgerton.

The stars and creator defended the decision around the intimate scenes, asserting that each story requires its own genuine way to be told. The satisfaction of Bridgerton lies in having a complete story in each season. "And that's really part of the draw to me for a project like this, the ability to tell these close-ended love stories of different characters season after season,” creator Chris Van Husen acknowledged. This allows a complete love story to take place without having to come up with fake obstacles to keep the plot interesting. With each season of Bridgerton, we reach “a satisfying conclusion.”

The entire second season of Bridgerton streams 25th of March on Netflix.