The newest anthology album from the world's biggest boy group is a testament to what has made them so beloved and admired.
Written by
Aimée KwanJune 10, 2022 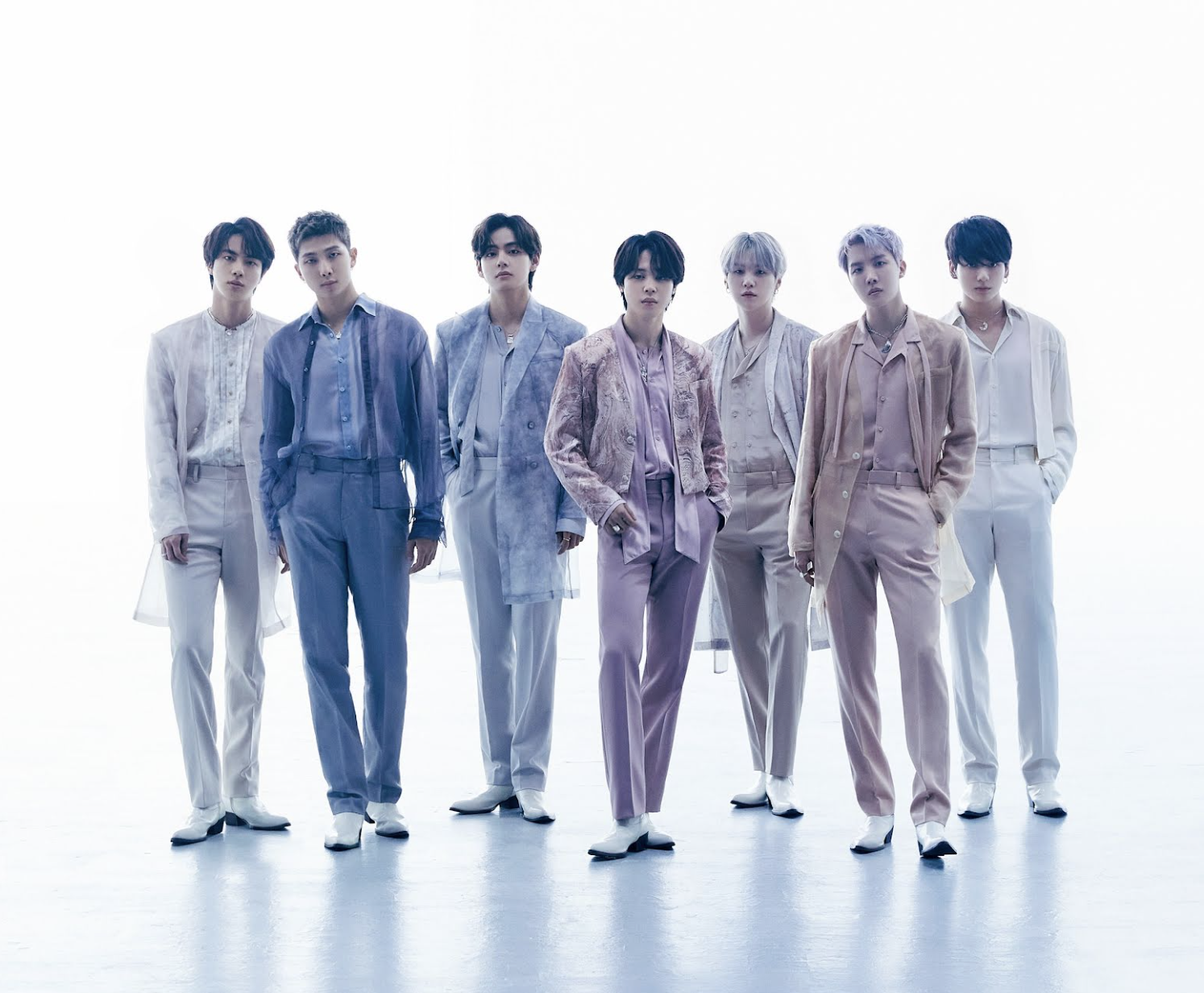 Some people like to say that the album is dying: whether that’s due to 1) an acknowledgment that streaming means people no longer go out and buy CDs like they used to, or that 2) the shuffle button means the craft behind a great tracklist order has plummeted in relevance. Yet BTS is now one of the few artists in the world that can guarantee, without a doubt, physical albums sold in the multi-millions: 1) defied.

Even with such success under their belts, many a naysayer has utilised the pop-friendly soundscape the group occupy, as well as easy stereotypes around the company and trainee system from which BTS originate, to discredit the group’s artistic abilities. Enter: Proof. As a three disc anthology album that features five new songs (two of which you can only hear if you purchase a physical copy), the group take a format that could have been an easy way for them to simply re-drop a bunch of their biggest hits to make bank, and instead use it to prove that their artistic integrity should be beyond question.

In the run-up to Proof’s release, the group released videos from each member detailing the specific songs they chose to include in the album, and why. Highlights include Jimin choosing ‘Friends’ and ‘Filter’, since BTS and ARMY’s existences have served to ‘help me remind myself what my essence is and keep myself centered’, and Suga choosing ‘Trivia 轉: Seesaw’ and ‘BTS Cypher Pt. 3: Killer’ since he feels that ‘challenging myself with no limits in the musical spectrum is who I am, and who BTS is’.

Every member has a story for their specific two song selections, and it is this sentiment that underlines the entire tracklist for CD two. After new track ‘Run BTS’ and the two selections by leader RM, the tracklist runs in order from oldest to youngest, allowing the listener to reflect on how each of them sees their journey as members of Bangtan as well as how they personally perceive their musical connection to listeners to be.

CDs one and three tell very different stories. CD one is a highlight reel of their journey from the very beginning to the present day. ‘Born Singer’ kicks off proceedings; the song gets its official release as part of Proof, having only been available on Soundcloud and YouTube up until now. The listener is subsequently taken through the group’s biggest hits such as ‘Danger’, ‘Run’, ‘Boy with Luv (feat. Halsey)’, ‘Butter’ and more, ending with their new title track ‘Yet To Come’. New fans of the group will appreciate the quick recap of many of the songs that have made the group so beloved, whilst long-time ARMY will not just be able to celebrate how far the group has come, but also recall all the equally great B-sides that have also come along in-between these hits.

CD three can only be heard by people who purchase the physical album or find the uploaded hidden tracks on YouTube, and is a selection of demos and behind-the-scenes cuts of some of the group’s songs. Several of the tracks feature single-member demos of tracks and puts their abilities front and centre (in case that was in any doubt). As a result, CD three in many ways reads as the most personal love letter and thank you to ARMY and casual listeners who have made the effort to truly care about BTS as artists: those who have seen beyond the group’s polish and style to understand just how conscientiously the group has gone about honing their craft and output over the years.

All this, and we haven’t even touched on the new tracks yet. ‘Yet to Come’ is an upbeat pop song that is emotional through and through (especially when you watch the music video). The beats that run in the instrumental pull the listener all the way back to the group’s early hip-hop pop sound  whilst the pop sheen across the rest of track ties in with the group’s more current sound. It’s a sentimental sonic three-minute reminder of all the group has been through, whilst telling listeners to be excited by where the group might go next.

Fans of the group’s cyphers will love ‘Run BTS’: aside from sharing a title with the group’s long-running variety show, the rap-heavy track is pure fun from beginning to end.

Such lyrics are the focus of the song, giving confidence to not just the listener but also BTS themselves, who sound like they had a blast recording the track. It serves as the perfect opening for CD two, where we see the group talking more directly to fans and listeners through their personal song selections.

Of CD three’s new tracks ‘애매한 사이 (Young Love)’, ‘따옴표 (Question Mark)’ and ‘For Youth’, only the latter is available for purchase online. As a song that opens with a brief concert recording of fans singing one of the group’s most famous tearjerkers ‘Young Forever’, it falls into a sweet mid-tempo serenade where the group reflects on how much both their fans, their members and their own selves have been important throughout their journey.

Without spoiling too much for those waiting to nab their copies of Proof, both ‘애매한 사이 (Young Love)’ and ‘따옴표 (Question Mark)’ are well worth the wait. Though both are very different tracks, they also harken back to the old-school BTS sound that will surely compel listeners who have not delved into BTS’ older albums (especially those from debut to 2016) to get on it stat. Hopefully, both songs will be released on streaming platforms soon, as they are too enjoyable to miss out on a wider release.

BTS has always made an event out of every album they have ever released, but Proof is a genuinely remarkable testament to so many things: their astronomical rise over the past nine years, all the genres and styles they’ve tried out across their discography, and how their in-depth attention to detail is a pleasure to experience.

Even though Proof is a behemoth of an anthology, clocking in at a whopping 48 tracks long (how does one even review a 48-track album and truly do it justice without writing an entire paper?), it is a record that is truly richer to hear in order from beginning to end from one to 48, with each individual CD also its own special microcosm of sounds and messages. The exclusivity of CD three’s selections not being available through platforms like Spotify and Apple Music will surely keep physical album sales healthy, but this is not purely a gratuitous marketing move: a listen to it shows, once more, BTS’ artistic intent given how the song’s selections are made for those that will truly open their CD players, pop in the disc and listen to it with full appreciation.

Proof is BTS at their best, bursting at the seams with all the tracks that have made the group great whilst magically offering the listener a completely new musical experience even though a large majority of the tracks are songs that have been released long before; for this Proof deserves the beloved place it will surely carve out for itself amongst BTS’ massive discography.

Some say people like to say the album is dying: the biggest boy group in the world would like to disagree.