HallyuPopFest London 2022 Day One: An Electrifying Lineup Comes To London

The first day of the HallyuPopFest festival held in the Wembley OVO Arena got off to a spectacular and thrilling start.
Written by
Aimée KwanJuly 9, 2022 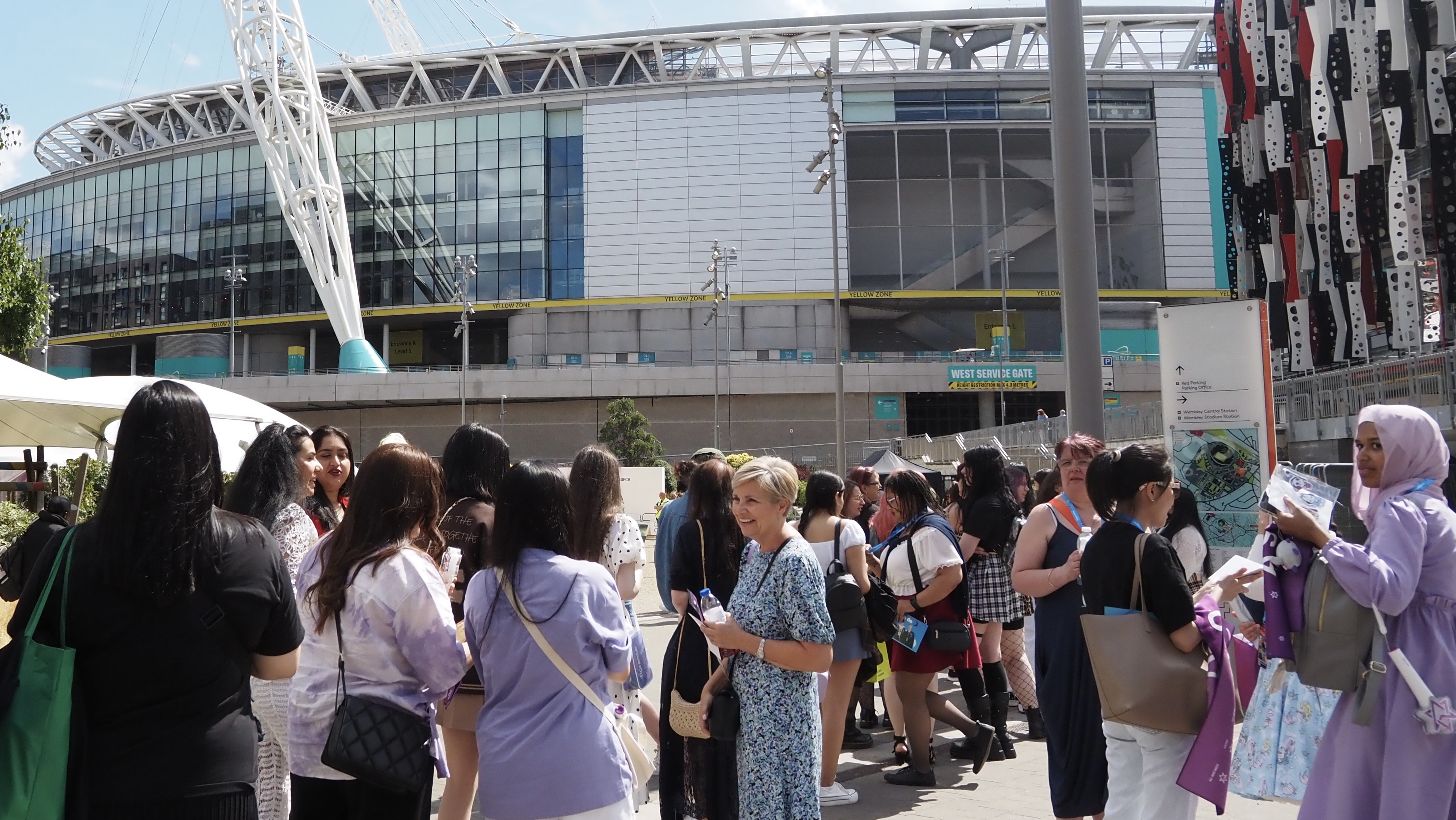 Earlier this year, it was announced that some of the biggest names in K-Pop were coming to London's Wembley OVO Arena for two nights and finally, on Saturday, the first set of the star-studded lineup showcased some of their biggest hits to delighted fans from around the world.

The festival's Showcase Stage spotlighted both smooth R&B singer Sam Kim and charismatic boy group P1Harmony with long sets where both artists also interacted with the audience through fun segments and activities. In a packed industry where standing out is half the battle, both artists surely won a whole new swathe of fans; Sam Kim brought some of his most loved songs like 'Summer Rain' and 'Make Up' to the stage through his sultry vocals. Though there were thousands in the audience, it felt like a private concert with his endearing quips and an impromptu song written on the spot for the audience.

P1Harmony brought an incredible level of energy to the stage during the concert and showcase stage, performing some of their biggest hits such as 'Reset' and 'Siren' as well as taking part in a dance cover challenge that saw them tackle songs by ITZY, Twice, aespa and more. The group also followed up Sam Kim again after he also opened the main concert, and the six member group got a massive response from the crowd both times.

Concept kings ONEUS then served the audience an incredible seven-song setlist featuring a combination of some of their most famous title tracks like 'No Diggity', 'LIT' and 'Luna', and also sang the English version of one of their ONEUS Theatre tracks, 'Life is Beautiful'. Given the group missed what was due to be their first ever European performance at KPOP.FLEX a few months ago due to COVID, there were swathes of Tomoon (the name of their fans) at Wembley and even casual listeners were surely not disappointed by their unstoppable stages.

Much adored girl group EVERGLOW followed on next by bringing some of the best dance pop bangers in K-Pop with them, including the epic 'LA DI DA' and their most recent title track 'Pirate'. Their slick, polished and high-octane performances were nothing short of brilliant, and you couldn't help but wish that the group was able to perform even more than the four songs they shared with concertgoers.

Third generation boy group ASTRO then took to the stage with an eclectic set of songs that showed off the diversity of concepts within their discography. A unit featuring members Jinjin and Rocky performing 'Just Breath' and 'Lock Down' was followed by two songs performed by members Moon Bin and Sanha singing 'WHO' and 'Bad Idea' before both units came together to sing their latest title track 'Candy Sugar Pop'. With eldest member MJ currently on military service and another member, Cha Eunwoo, currently away on a different schedule, it was a great chance for the dynamics between the units to shine, and hopefully we'll be able to see ASTRO back in the London one day when all six members are together.

MAMAMOO member Hwasa drew a huge response from the crowd, singing not just her best known songs 'TWIT', 'María' and 'I'm a B', but also the beautiful ballad 'Bless U' and 'Intro : Nobody Else'. She also delivered of the sweetest moments of the entire evening when she sang happy birthday to one of the fans; her stage presence and performance skills have long been lauded in both her solo work and her work as a member of MAMAMOO, and her passion and spirit could be felt throughout the entire venue.

By contrast, EXO's CHEN brought the first day of HallyuPopFest to a gentle and meaningful close through a heart-wrenching set of songs that featured some of his best-loved OSTs as well as tracks off his own records. Lightsticks and phone torches were aglow as he showed off his incredible vocals through songs such as 'Shall We?', 'Beautiful Goodbye' and 'Everytime'. The lightsticks belonging to EXO-L (the name for EXO's fans) never dimmed for a second and the simplicity of his performance, with the singer holding his own on stage alone with no frills or dancers, highlighted why he is so beloved and appreciated as a singer and artist.

The concert was rounded off by all the artists coming back on stage for one last curtain call and celebration of a great night that did not disappoint at all. Ticketholders found themselves treated to a set of diverse and no-holds-barred performances that ran for just under six hours. Concertgoers set to come on Sunday can be assured they have an exciting and vibrant concert to look forward to if day two is anything like day one and even the most casual listener of the genre would surely have left Wembley full of admiration for the great artists that brought their all to London.