&ASIAN sat down with the wonderful Ramona Young, one of the stars of Netflix’s beloved dramedy Never Have I Ever, to hear what she had to say about her journey into acting, Asian representation and what fans can expect from the upcoming third season.
Written by
Aarabi BaheerathanAugust 10, 2022 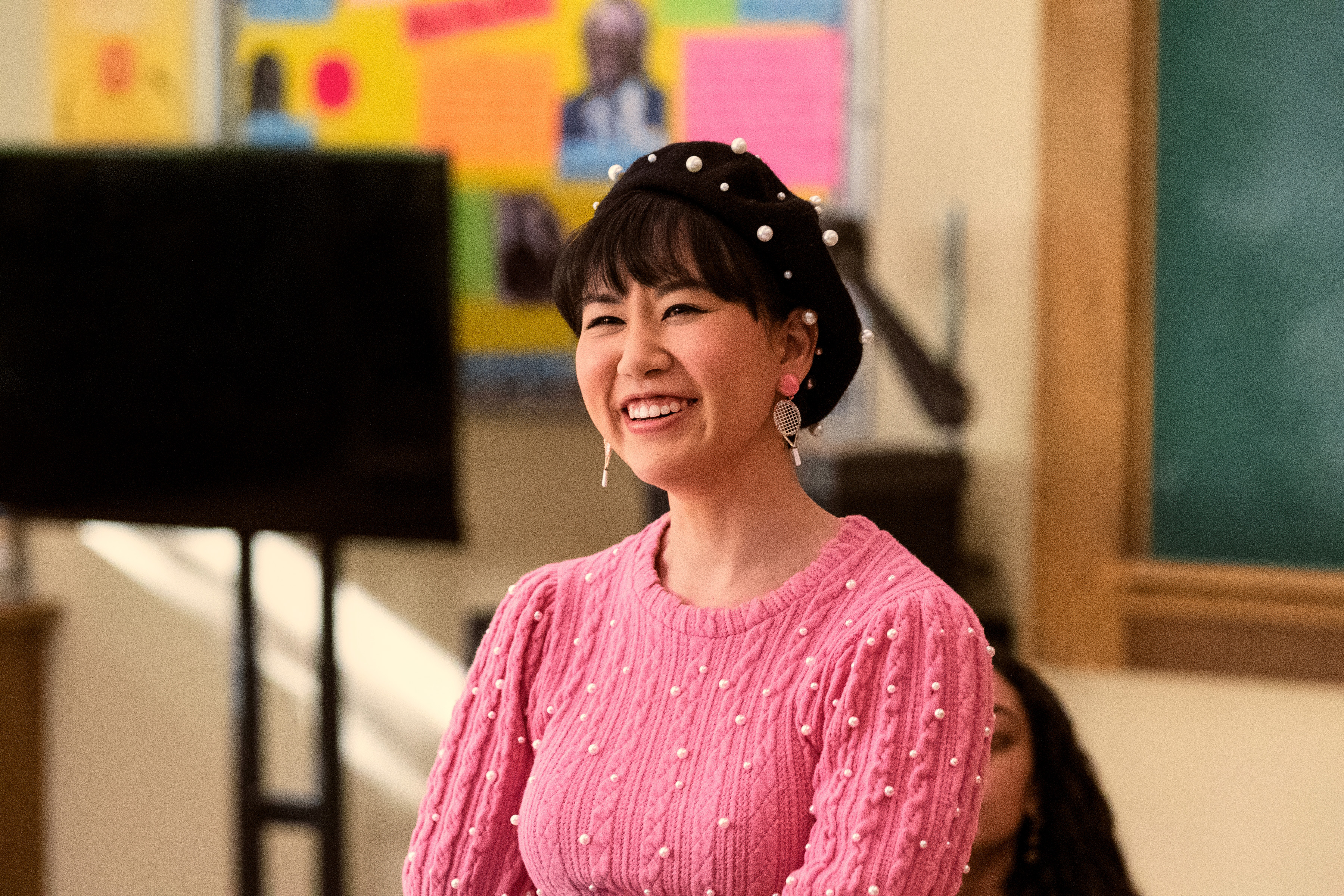 Hey Ramona! Firstly, how are you? How is filming going?

I am doing great; we are in the midst of filming Season 4 and we’re almost done!

That’s so exciting! How do you feel about being a part of a show that’s renewed for 2 more seasons like that straight off the bat?

It’s exciting, I mean, it just reaffirms that we’re doing a really good project together, which is super lucky for all of us to be a part of.

I think ultimately, it’s a side of Asian representation that people don’t see a lot, which is an Indian girl, but she’s messy and angry and all these things that are so relatable to everyone, and we just haven’t seen that type of character on screen yet.

I totally agree. Coming off of that, it has been such a pioneering show for South Asian representation, but has also been so expressive of AAPI and LGBTQ+  themes. Did you expect this when you first got involved, and did you expect it to have the reaction that it did?

What was the audition process like? Was it nerve-wracking?

It was one of the last auditions that I did in person, before the pandemic hit. It was very traditional, it was just, you sit in a room, full of girls, and you hear them auditioning from the other room and then it’s your turn and so yeah, it was a little nerve-wracking!

I can imagine! You’re a first generation Chinese American and grew up in Hong Kong, if I’m correct?

Yeah that’s right! My parents are immigrants and I’m first-generation, and I grew up both in Hong Kong and in the United States.

How was it going into acting with that background? There’s not a lot of roles for AAPI actors, but also coming from a background that doesn’t necessarily consider acting a legitimate career. Amongst Asian communities, young people have struggled with being feeling supported by choosing acting as a career path. Did you experience this at all, and how did you find going into acting?

It was very challenging, if I’m going to be honest. It was a lot of swimming upstream and having to prove myself and a lot of times, I would hear from my family that “oh, there’s no spot for Asians on screen.” I went through that a lot. But it was just about being persistent, I’m a very stubborn person.

Well, your stubbornness paid off! How has the reaction been from your family after seeing all your success?

I’m glad to hear it. What would you say to young girls with similar backgrounds that also want to go into acting or do something that doesn’t typically have a lot of space of Asian people?

I would say, even if it’s scary, and you have a lot of doubt, if that’s what makes you happy then you should try it – why not?

Let’s talk a little more about Never Have I Ever. In season 2, we saw Eleanor really struggle with her relationship with her mother, and we saw a lot of character development from the first season. How do you feel she develops further in season 3?

So much happens to her in season 3, and I am so excited about the season coming out. Aside from dealing with her mother, there are a lot of new obstacles that come out. However, I feel like Eleanor is maturing and dealing with a lot of her obstacles with surprising maturity and sophistication, which I’m super proud of.

That’s so great to hear, but I’m hoping she doesn’t lose her dramatic flair? I think that’s our favourite thing about her!

We love to see it. Her relationship with Fabiola and Devi is so heart-warming to see, and it’s so rare to see such an inclusive and such a genuine female friendship group on television. They’re support of one another but they’re honest with each other too, and they call each other out when they need to. How do you bring such warmth and chemistry to that friendship, and does it reflect your friendship off-screen too?

Yeah, I think a lot of it is just us genuinely getting along. No matter how the characters fight and stuff, it’s still coming from a place of love and wanting to support each other. None of the girls want to sabotage each other or want to do anything awful, so even if they fight, it’s a misunderstanding or because of their own self-doubt, it’s never out of hate.

You know these girls have so much to navigate in their lives, but one thing they love to hyper-focus on are their romantic interests – how is Eleanor’s love life in Season 3?

Eleanor’s love life is the most exciting in this season, I feel like, I can’t wait for you to see it.

I’m super excited now. We talked about how rare it is to see such a broad scope of representation on Television, but not only is it rare to see that, to then see these girls of different ethnic backgrounds on an adamant quest to lose their virginities in high school, that is another level of exceptional – how did it feel incorporating that? Did it feel like you were breaking new ground at all?

Yeah and also not just girls wanting to lose their virginities with our backgrounds, but also we’re just so, not cool. Laughs. It would be different if they were popular girls trying to lose their virginities, but the fact that we’re nerds, and I’m a drama nerd, and you know, everyone is just so nerdy, I don’t know, there’s just such a unique sense of humour to that.

Yes, and it works so well! They’re such multi-layered characters and it’s beautiful to see.

What would you say is the most surprising thing about season 3? Is there anything you can tease for us?

The most exciting is just, the decisions that girls make have never been as extreme. So many big things happen to these characters, to all of them actually. It’s just bigger and better, and I feel like the audience will be really invested because we now know the characters better, we know their backgrounds better, we have all the set-up already, so just watching them make these huge decisions… I hope that people like it.

There’s a question I must ask you and it wouldn’t be a NHIE interview without this question – are you Team Ben or Team Paxton?

I thought I was Team Paxton and now I don’t know anymore. I feel like I might be Team Ben now! Every interview I do, I’m just going to say a different answer because I really can’t decide anymore.

Yes, we are always Team Devi.

It’s so hard because obviously, Paxton is Paxton, but enemies to lovers is an unbeatable trope! (Both laugh). If you could play any other character on the show, who would it be?

I would absolutely play Trent.

I wanted to ask you about that! Some fans are aggressively shipping Eleanor and Trent – did you know this?

I’ve seen quite a few fan videos of the two, after they danced together in Season 2.

Oh, that is so cute!

Do you see that in the cards for Eleanor at all?

It’s in the deck somewhere…

Before you go, I just wanted to ask you a couple more questions about you. I read that you speak Mandarin and Cantonese, is this something that you want to bring out more in future roles?

Yes, that’s correct! It’s something that I’ve wanted to bring out in future roles for sure. I think that would be so cool to get to do that, so I’m waiting until that day happens.

Similarly, I also read that you’re a bit of a martial arts expert!

I wouldn’t say expert, I would say a hobbyist.

Very humble! Could we see you in a bad-ass action packed role? Is that something you would consider?

Yeah, absolutely. I think that would be super fun to do as well.

I could imagine you as the next Marvel megastar.

One last question - is there anything you want people to take from the upcoming season?

I think Never Have I Ever has done such an amazing job of doing that so far and all of you guys have done such a great job. I am so excited to see it and am so grateful that you sat down to have this interview with us.

Thank you. Thank you for having me, I can’t wait for you guys to see it on the 12th!

Never Have I Ever returns to Netflix on Friday the 12th of August 2022.