Writer-director Iris. K Shim makes her directorial debut with Sandra Oh playing Amanda, a mother dealing with the traumatic memories of her own mother, and how this affects her relationship with her daughter Chris (Fivel Stewart).
Written by
Aimée KwanMarch 18, 2022 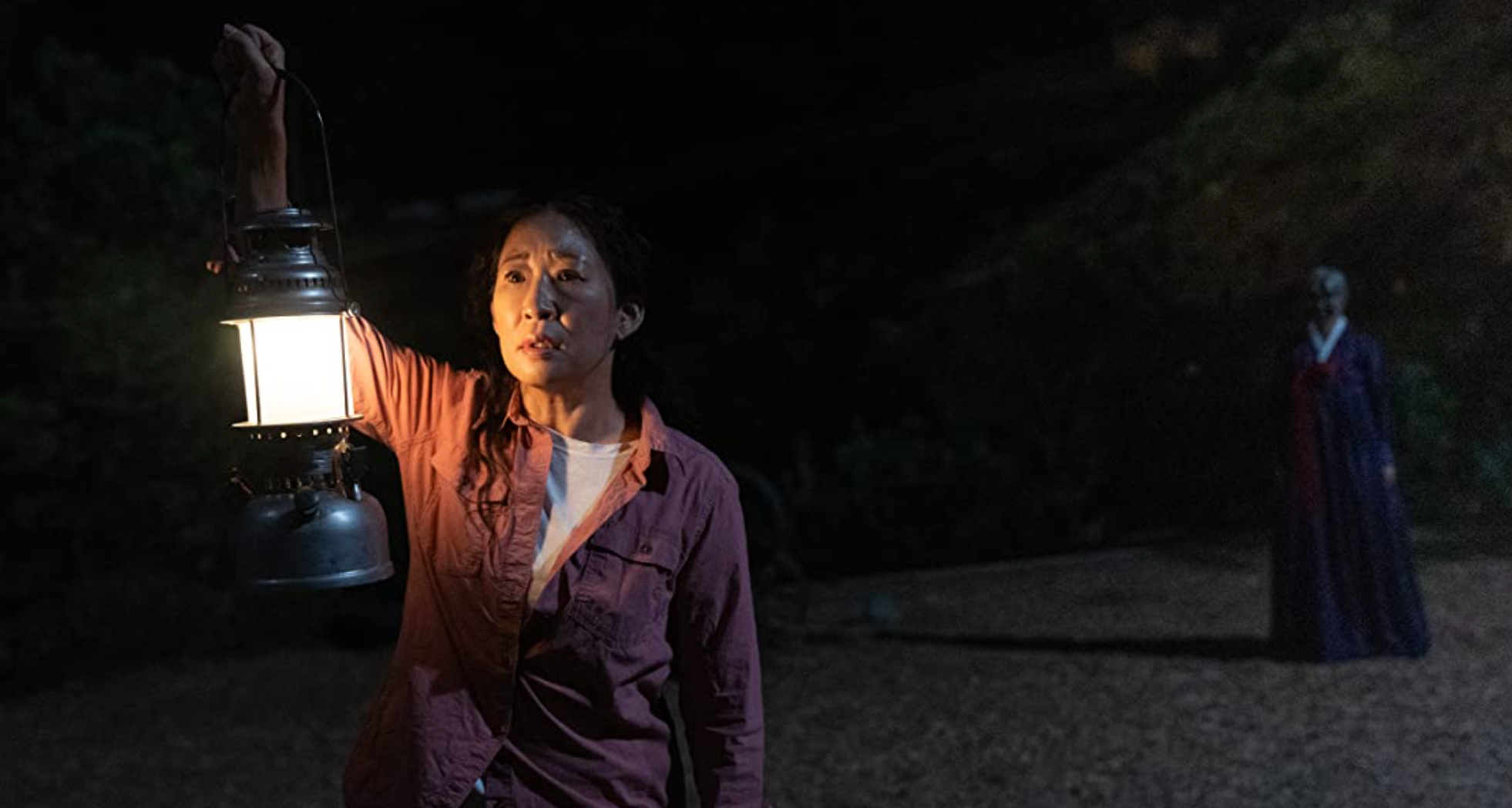 There is a moment in Umma where Chris (played by Fivel Stewart), takes out an old typewriter to fill in a college application. This in and of itself should not be especially notable, except the movie is set today and the concept that in today’s hyper-connected culture the idea that an American teenager might grow up in a house with absolutely no electricity whatsoever (and all that comes with it) rather strange, potentially even a little disturbing.

Indeed, writer-director Iris K. Shim uses this electricity-less setting to full effect in her feature directorial debut to create an undertone of discomfort that builds to full psychological thriller. Umma (엄마), the Korean word for mother, follows mother and daughter Amanda (Sandra Oh) and Chris in their relatively secluded lives as beekeepers who live on a small farmstead out in the middle of nowhere. Amanda still holds a lot of trauma over the unhealthy and abusive relationship she had with her mother (MeeWha Alana Lee) - who Chris has grown up not knowing about - whilst Chris is on the cusp of her college years and wants to figure out who she is. However, Amanda struggles with nightmares, social anxiety and a severe phobia of electricity and as a result her relationship with Chris blurs the lines between daughter, friend, carer and representation of the chance to undo her past.

The only figures that interrupt this solitary mother-daughter set up are regular visitor Danny (Dermot Mulroney), his daughter River (Odeya Rush), and Amanda’s uncle Mr Kang (Tom Yi). Danny is the connection that Amanda and Chris have to the world outside, as he helps to sell the honey the two make to retailers the family obviously cannot interact with online. Dermot Mulroney does a great job as the charismatic friend that brings a burst of energy and alternative viewpoints into the isolated and claustrophobic set up of Amanda’s family, and the carefree and social existence his daughter has only drives home to Chris how much of life outside of her mother’s restrictions she is truly missing.

However, things start to kick up another notch when Mr Kang shows up out of the blue from South Korea to tell Amanda that mother has died, leaving behind a suitcase of her remains and old things. The movie is the definition of a slow burn, as after this intrusion Amanda starts to see her mother here, there and everywhere, and as she starts to unravel, so does the strong connection Chrissy has with her mother at the beginning of the movie.

What is most unsettling about Umma is that at no point we’re never sure to what extent the spirit of Amanda’s mother is ever real or merely all in Amanda’s head. The means with which she tries to deal with her childhood trauma are somewhat akin to putting different plasters and bandages on a broken leg without ever trying to see a doctor to get an effective course of treatment. At first glance, the Umma represented in the title seems to refer to the spectre of her mother, the mother that seems to linger over Amanda's shoulder in every single memory and every single action. Yet as the movie continues we wonder who the Umma truly represents; Sandra Oh plays her character's inner turmoil deliciously as we watch her unravel further and further over the course of the movie. The flashes of joy she gets from being with Chris become less and less frequent as her thoughts overwhelm her and Oh does a wonderful job showing flashes of her own mother across her face in her most unstable moments.

Beyond exploring the concept of mother-daughter trauma Shim also confronts the extent to which this is intertwined with cultural identity. There’s a moment early on in the movie when Chris is spoken to in Korean, and no subtitles are shown to help us comprehend how her mother has disconnected Chris from her Korean heritage on purpose. The imagery and setting is all-American until the influences of Amanda’s mother start to set in, from the gumiho (a nine-tailed fox) that appears at several moments in the movie, to the significance of the hanbok (traditional Korean dress) Amanda’s mother made by hand.

For viewers wanting or expecting a full on horror-fest, they may be disappointed by Umma’s climax, and for a movie exploring the trauma parents inflict on their children across multiple generations, Shim treads the kind of ground we might expect. Parent-child relationships are complicated and messy, and even for those with a blissfully happy childhood there is often a need or compulsion to either pass down or rectify the way our parents treated us to our own children. There is beauty that lies in one of Umma’s scenes between Amanda and her mother, where, within several lines, we are given a chance to understand her mother’s perspective for the first time, whilst at the same time we also see Amanda fully delve within herself. You almost wish Shim would explore the depth of these elements more during the movie due to the many years of therapeutic work those who have gone through such abuse have to do.

Yet, for a feature debut the depth of what Shim covers is admirable, and how she showcases both Korean culture and how immigrant children learn to embrace the culture of their ethnicity is multi-faceted in how complicated their experiences can be. Furthermore, she explores womanhood throughout the film as well: none of the women in the movie are forced within traditional horror stereotypes, and given the still-existing stigma around single mothers, it is never questioned that Amanda is never able to do her best for Chris or is thought of as less by Danny or River. With the all the layered themes Shim touches on, it is almost a shame that the movie is not a few minutes longer so that the audience can sit with the ideas and perspectives she wants to address just a little longer.

To the movie's credit, the horror aspects of the movie are rarely over elevated to the point of gore or complete escapism and the focus is always on the film's relationships in driving the plot forward. However, given the build up of the movie is so meticulous, certain plot points do not feel fully wrapped up as much as they could be, and at moments the ending feels a little too fast, at odds with the layers of complexity Shim, Oh and Stewart give to both Amanda and Chris earlier on in the movie. However, Amanda and Chris’s relationship is played so honestly and true to life by both actors that you keep watching Umma just to see how the mother and daughter deals with the overwhelming spectre of Amanda’s mum. With this in mind, and for all the messages the movie conveys, it's exciting to imagine what new stories Shim will bring to the screen in future.

Ultimately Umma is an exploration of how parenting is a cycle; and the results of how we try to fix or break our childhood experiences (or not) can always come back to haunt us, though perhaps not quite as literally as it does for Amanda. But when it comes to healing and dealing with who we are today, tomorrow and beyond… It's never too late to start.

Umma is out today.