Two beloved stars of the K-Pop industry help to round off the second and last day of Europe's biggest K-Pop festival.
Written by
Aimée KwanMay 16, 2022 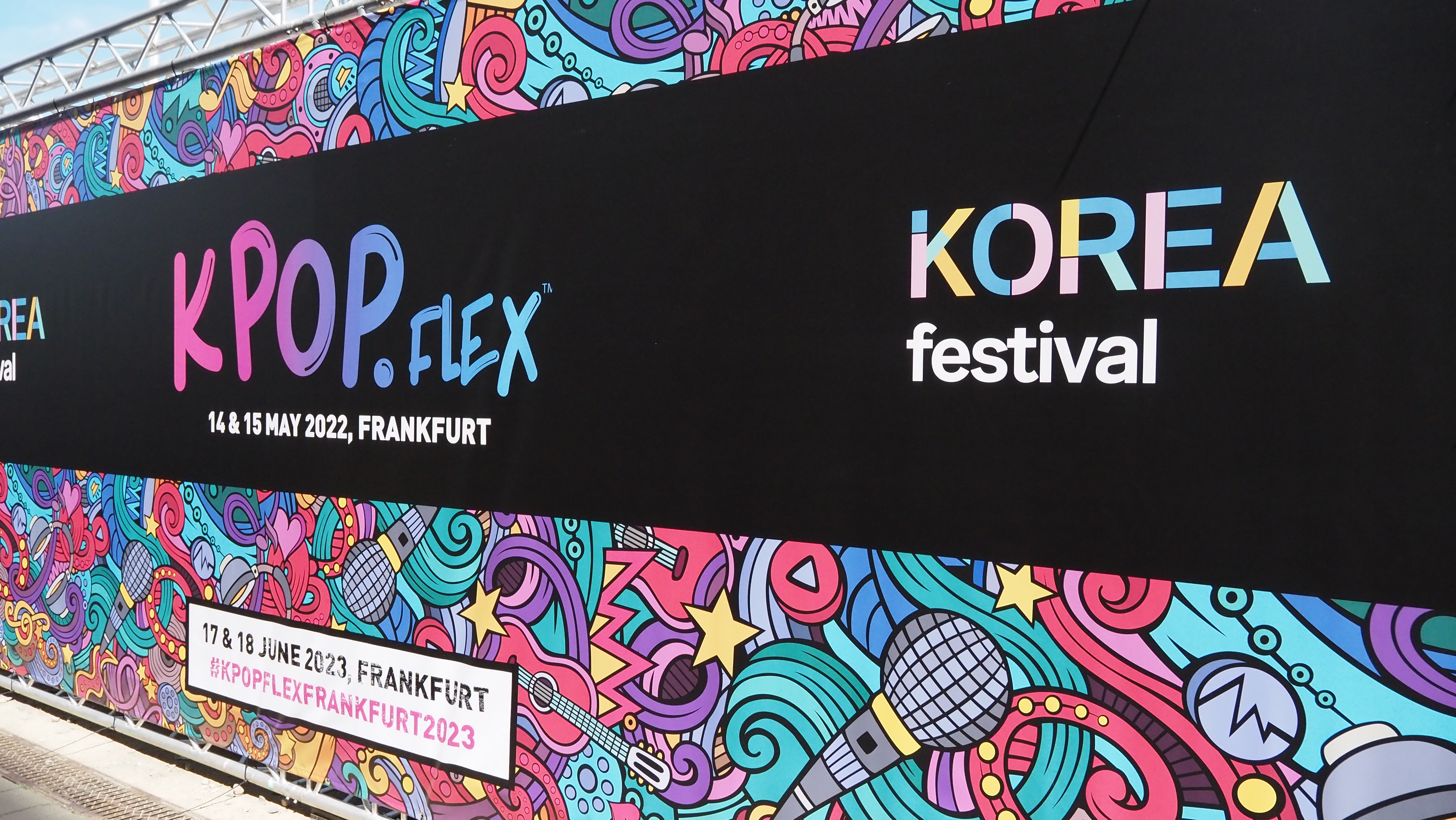 The sun was out in full force for the thousands of fans that had headed down to Frankfurt to catch their favourite artists perform as part of the exciting lineup put together and touted as Europe's biggest K-Pop festival. First day stars Kai, MAMAMOO, AB6IX and IVE were joined by boy group MONSTA X and girl group Dreamcatcher to round off the last day of the festival weekend.

Kicking off the lineup was legendary girl group MAMAMOO, who performed three songs from the previous day's setlist, 'HIP', 'AYA' and '고고베베 (gogobebe)'. The group still had a surprise up their sleeve for fans, performing the song 'Um Oh Ah Yeh' as their final farewell instead of the previous day's song '하늘 땅 바다만큼 (mumumumuch)'. The festival began an hour earlier than fans had previously been told, meaning that several Moomoos (the name for the group's fans), found themselves missing their favourite artist's set. However, the group's ever-infectious energy meant that there was no shortage of support for them in the crowd, and hopefully the group will be back in Europe for more concerts in the future to perform their signature brand of perfect vocals and charm-filled attitude to European fans.

Rookie girl group IVE followed hot on their heels, with the six-member group performing their breakout hit 'ELEVEN', as well as newer releases 'LOVE DIVE'' and 'ROYAL'. For a group still less than a year old, their fast popularity was reflected in their palpable excitement in travelling outside of Korea to perform to international fans for the first time. Though they have only three songs under their belt, the girls radiate promise in their polished performances and fans will no doubt be excited to see what else 2022 brings for the group.

The electro-rock girl group Dreamcatcher took to the stage to a tidal wave of screams and cheers, with many of their epic lightsticks (shaped like a magic staff) to be seen in the crowd. They performed arguably one of their best songs, 'Scream', as well as two other well-known tracks from their discography, 'Boca' and 'You and I'. The group have always brought nothing but badass, no-holds-barred energy to their performances, and this was never more evident in day two's Special Stage, when the group took to the stage to perform a rock version of BLACKPINK"s hit 'Kill This Love'. Their performance drew a massive reception from both cloaked (and non-cloaked) fans and casual listeners alike, and showed off just why the girls inspire such a devoted following around the world.

Amongst a flurry of dreamy pop the beloved AB6IX returned to the stage in a lush black and silver version of their white and silver costumes from the night before. The group also mixed up their setlist for day two, which featured the songs 'CLOSE', '1,2,3' and 'DO YOU REMEMBER'. However, one of the most charming moments of the entire afternoon appeared in the form of the group teaching snippets of several famous choreographies to the audience. NCT 127's 'Kick It', BLACKPINK's 'DDU-DU DDU-DU' and BTS' 'Permission to Dance' were the songs of choice and put many smiles on faces. The group have a new album A to B coming out on the 18th of May and perhaps some newly charmed fans will find themselves checking the record out.

(G)I-DLE were the last female artists of the night and overcame the wrong song initially being played instead of 'Oh My God', in order to pull off another stellar set of performances that also included hits 'TOMBOY' and 'LATATA', as well as the hyped-for-a-reason B-Side 'My Bag'. The group featuring as part of the KPOP.FLEX lineup preludes their world tour upcoming later this year, and teases what is sure to be a slick and successful tour for the girls. Europe dates are yet to be announced, but hopefully today's crowd, as well as many other European Neverland (the name for the group's fans), won't have to wait too long before the group return to these shores.

From early in the day another light stick not seen the previous day could be spotted in the hands of various attendees, one that belonged to the veteran boy group MONSTA X. Having just released their newest mini-album Shape of Love, the group performed their newest title track 'LOVE', following it up with 'Autobahn' before doing a segment with fans. The group are set to go on their tour of North America shortly, and they brought nothing but playful energy to their interactions with both fans and one another. For Monbebe (the name of the group's fans) due to see the group in person soon, they're certainly in for a treat. The group ended their stage with previous title track hit 'GAMBLER' and '사랑한다', the latter in particular ending on an uplifting and positive note for the delighted audience.

EXO's Kai returned to the stage with all the panache and grace we've come to expect from him, and his stages felt just as fresh as they did on the first day, where he performed the setlist of 'Peaches', 'Vanilla', 'To Be Honest' and '음 (Mmmh)'. It was fitting that an artist that is both so beloved and respected within the industry as Kai should round off the entire two-day K-pop spectacle that has seen fans from around the world enjoy dozens of spectacular performances from so many fantastic artists.

KPOP.FLEX have already announced that they'll be returning with another lineup next year, bringing the K-Pop mega-fest back to Frankfurt once more. Whilst it remains to be scene how the festival will develop and grow next year (and watch this space for our overall festival review!), the two concerts have been a wonderful opportunity for all these talented and amazing artists to shine brightly in front of European fans that have missed them terribly during the pandemic. Hopefully, with more and more of the world opening up, KPOP.FLEX's two shows are but an indicator of all the wonderful K-Pop concerts set to come to fans around the world in the coming months. For now, it is just enough to reflect on the unforgettable spectacle of music, artistry and performance that all these artists have gifted us over the past weekend.