The festivals’ inaugural event lacked efficient organisation but was ultimately saved by a solid line-up and incomparable fan dedication.
Written by
Aarabi BaheerathanMay 17, 2022 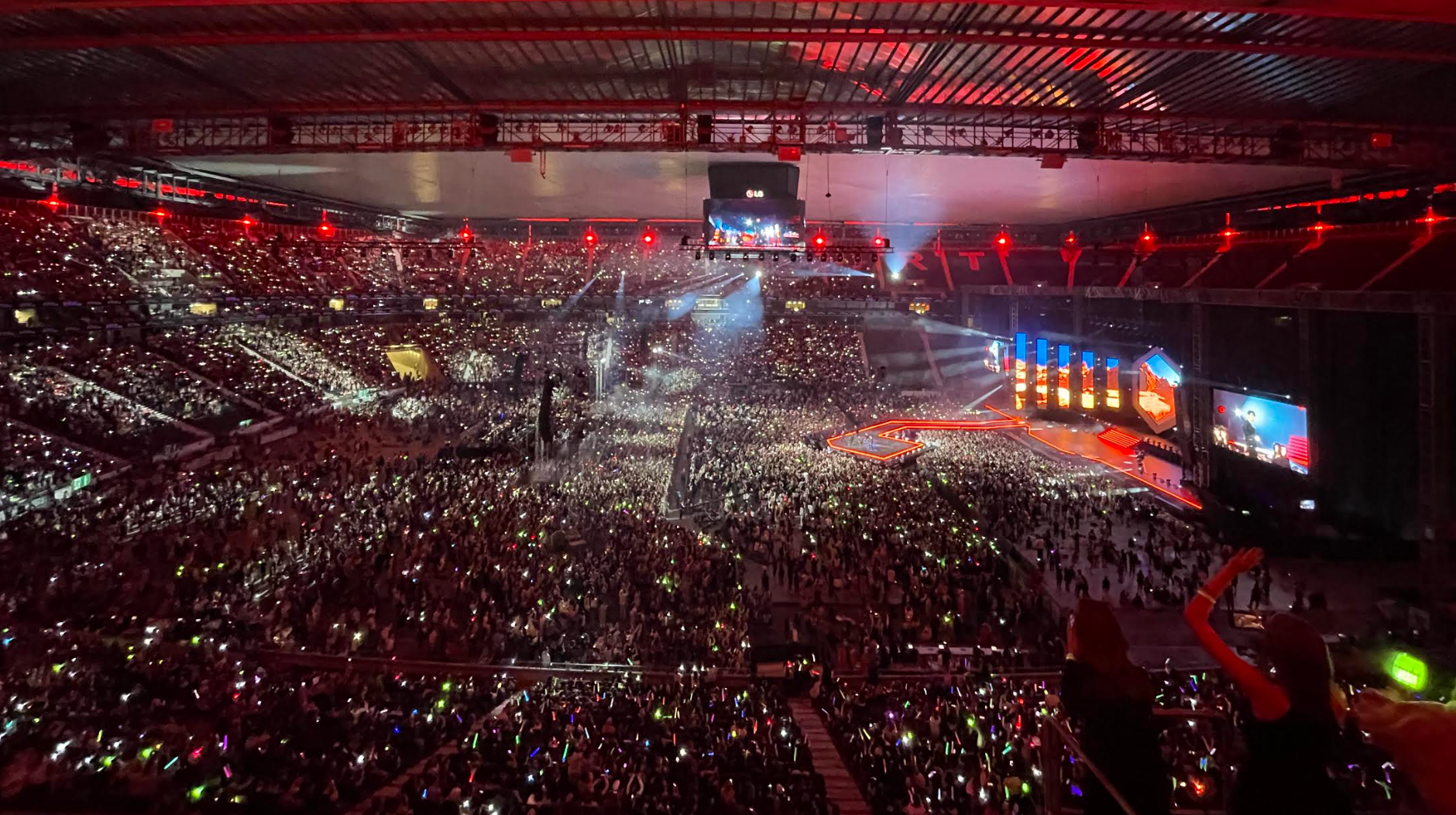 The globalisation of K-culture is a phenomenon that has been increasingly frequent in the entertainment industry. In the last decade especially, Korean popular music has become a powerhouse in the global music industry, known as one of the fastest-growing major markets and its legion of extremely passionate fans. There is no force quite as strong or as dedicated as a K-pop stan. As someone who’s reasonably new to the world of K-pop, Europe’s first big ‘mega-festival’, KPOP.FLEX, was the most intense but most wonderful welcome into the genre, and it’s easy to see why stans get swept up.

The festival held a Fan Fest outside the main stadium, across Deutsche Bank Park, and consisted of food, drink, merchandise, and leisure stalls as well as organised events such as a dance contest and fan quizzes. Activity stalls gave the opportunity for Korean brands and companies to promote themselves, whilst allowing fans to engage with Korean culture. A favourite of mine was being able to paint a buchae, a handmade handheld fan – sitting quietly and painting with watercolour brush pens provided some much-needed respite in the intensity and commotion of the day. Free samples of food were given out to offer a tantalising taste, whilst full Korean meals, drinks and street food could be purchased (we, at &ASIAN, admit that we devoured several bowls of Korean fried chicken and loved every minute of it).

Another highlight was the dance cover contest, in which fans performed in front of judges. A delayed start actually worked in the festivals’ favour, as fans who had been waiting to watch the contest began dancing together themselves when K-pop anthems blasted across the speakers. The energy this generated was unreal. As a rookie, I had never seen that level of commitment; so many fans knew every dance to every song, and it was beautiful to watch a variety of people come together through such powerful shared love.

The unparalleled atmosphere was let down somewhat by poor organisation. An event of this scale is understandably difficult to co-ordinate, and festivals are known for an inevitable compromise on wellbeing, but the event left a lot to be desired in terms of health and safety. On a particularly sunny day in Frankfurt, there was little to no shade across Deutsche Bank Park, and the stifling heat became genuinely uncomfortable and dispiriting after a while. With extremely long lines for drinks and food, and alarmingly few drinking water taps for over 40,000 people, fans were dizzy with more than just excitement. There were several reports of festival goers having panic attacks and several fainting: the sound of an ambulance siren could be heard distressingly often.

Fans were particularly unhappy with timing changes, noting that the promised 5-hour show ended up being a 2-hour pre-show and a much shorter setlist from the idols than anticipated. The Sunday show drew criticism, with many fans missing the start of the show when organisers suddenly announced the show was starting at 3pm, despite having said 4pm earlier that same day. With tickets costing as high as 400 euros in some cases, hopefully fans who missed some of the concert will be able to find some relief or compensation from festival organisers.

Once the performances from the idols started, the concert could not be faulted. The electric atmosphere was also aided by announcements and videos played on the screens that hyped fans up. VCRs were played of every idol on the setlist, as well as a cameo of Squid Game’s beloved model-turned-actress Jung Hoyeon. The performances were also electric and high-energy, with the idols helping to send the message of cohesion and unity. Although not surprising with acts such as Kai, MONSTA X, MAMAMOO, ENHYPEN and NCT DREAM performing, the noise level was truly insane, and I was genuinely in awe of some of the fan reactions I witnessed.

‍Ultimately, despite poor organisation, fan dedication and atmosphere generated by this, is what helped KPOP.FLEX to be an unforgettable experience and an effective impression of K-Pop and the culture that envelopes it. Worthy of an annual visit, KPOP.FLEX has secured itself as an emblematic event.

Catch our coverage of Day 1 and Day 2's concerts if you haven't already!