As the MIK Festival lands in London for its inaugural edition, the &ASIAN reviews its Day One lineup, focused around a dazzling selection of K-Pop stars.
Written by
Aimée KwanAugust 2, 2022 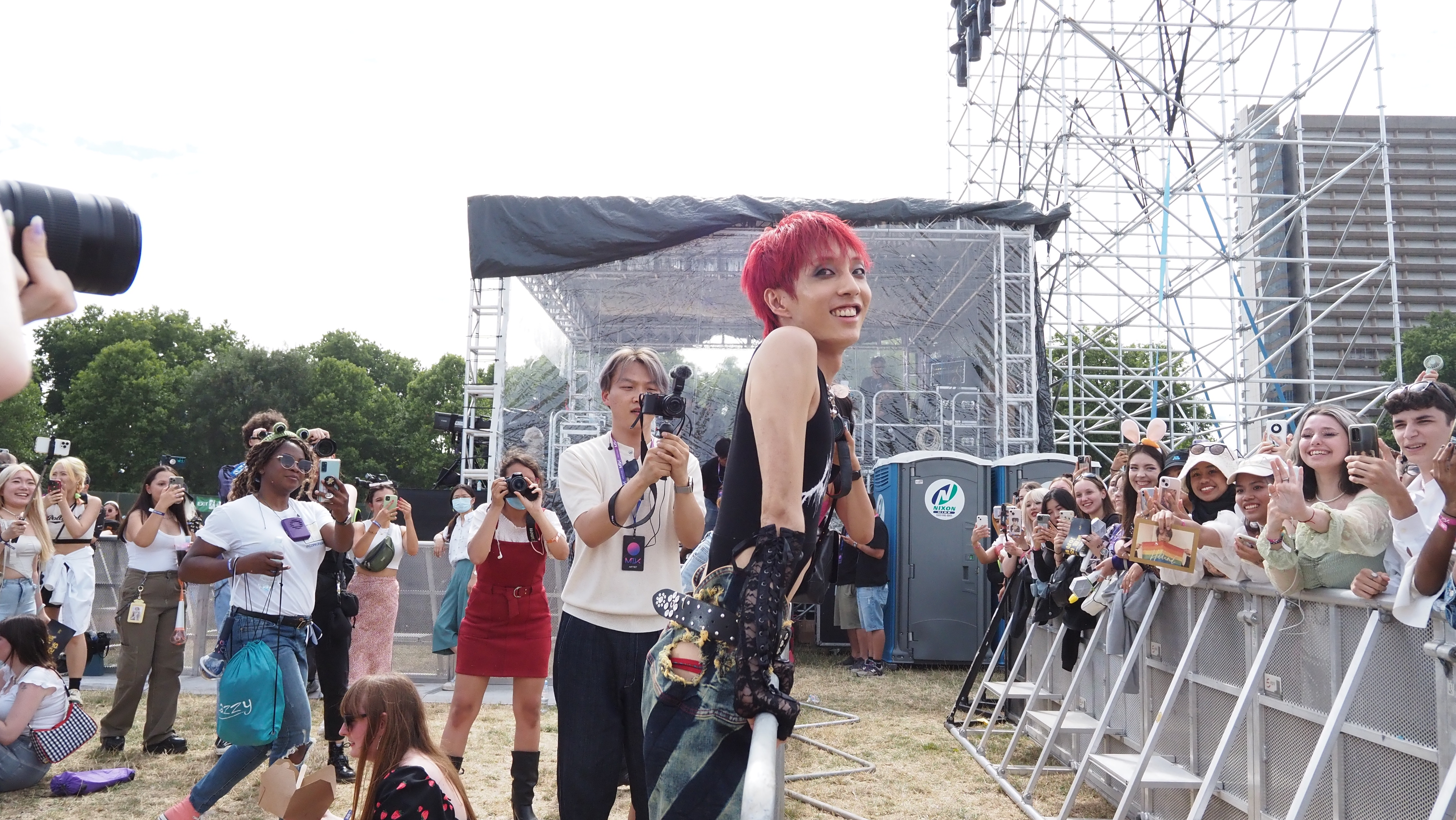 As K-Pop has exploded globally in the past few years, so has the desire to bring more and more artists from the genre over to other shores around the world. Whilst the pandemic halted many plans to do so for two years, the brand-new MIK (Made In Korea) Festival saw a diverse line up of artists from the genre entertain audiences from around the UK, Europe and more in London’s Southwark Park.

During the festival boy groups and girl groups alike were celebrated, with legendary girl group Red Velvet the headliners of Saturday’s K-Pop line up, performing some of their biggest hits such as ‘Psycho’, ‘Bamboleo’ and ‘Queendom’, before surprising the crowd with a secret encore performance of ‘Red Flavor’. Although member Joy was not with the others during this set, the group’s stages were undeniably electric, and their interactivity with the crowd kept the summer spirit going right until the end.

VIVIZ also brought this summer vibe to the thousands in attendance, with refreshing songs from their two albums being main the focus of their setlist: ‘Lemonade’, ‘Love You Like’ and ‘LOVEADE’ some of the feel-good selections that lit up the park. Girl group Cherry Bullet were also an adorable breath of fresh air earlier in the day, and the group’s red, gun-shaped lightsticks could be seen clearly all throughout the crowd. Their happy spirit and fun songs were perfect to get the crowd going during the first half of Saturday’s setlist.

Boy group Golden Child surely won some new fans as well on Saturday, given the fun pop goodness they also brought to the table. The ten-member group promised to return to London soon after renditions of their debut song ‘Damdadi’, other loved hits like ‘Burn It‘, and more. Large cheers went up in the crowds when they took to the stage, and a short rendition of Coldplay's 'Yellow' from one of the members did not go amiss in the slightest.

Beloved boy group Pentagon had an instant impact when they appeared, with the members going all out for the London crowd with their smooth styling and intense stages. Clad in suits and full of confidence, their set sped by via renditions of songs ‘Feelin’ Like‘, ‘Do Or Not’, ‘Shine’ and many others. Performing as though they were veterans of the industry, their performances were impactful even from the very back of the park to the front of the stage, and hopefully the group indeed return to London very soon to serve more of their powerhouse stages.

Three soloists also graced the stage at Southwark Park, each as memorable as the other whilst also displaying why solo artists within the K-Pop industry should be as celebrated as the groups. EXO’s Suho was one of the highlights of the night, with his rock and alt inspired set very impressive. His live band was also with him, and it was a great touch to see each of the instrumentalists also getting their moments to shine. Suho’s live vocals were crystal clear throughout his entire time on stage, and his reverence for The Beatles was reflected when he treated the crowd to a brief performance of ‘Let It Be’. His love for EXO-L (the term for EXO's fans) was referenced throughout his time on stage, and with fellow EXO members Chen and Kai also having recently lit up London this year with unforgettable standout performances, he now joins their ranks.

Chung Ha also brought her slick sense of style and attitude to the MIK Festival stage, and even performed her brand new upcoming song ‘Don’t Believe In Love’ to the crowd. Her star has continued to rise in 2022 with the release of her newest album Bare&Rare, Pt. 1, and her stage presence and energy brought those songs to life from the recording studio to the thousands singing along. Solo female artists owned the MIK Festival stage all weekend, and Chung Ha certainly kicked it off with aplomb.

The very beloved Holland opened the show with short but sweet set, yet he also had one of the most memorable moments of the entire day as he stood on stage holding a giant pride flag and announced to the world that he was ‘fu—ing gay!’ As one of the few openly gay idols in the industry, his presence gives meaning to so many fans around the world, and to the delight of many in the London crowd he even took time to walk around and speak to fans after his set. Not just an idol but also a fan of the genre, Holland could be seen frequenting the Golden Circle throughout Sunday to watch performances of the other artists.

All in all, the first day of the MIK Festival, London 2022 brought joy, tears and a whole lot of summer fun to the crowd. The open air setting lent itself well to the generally up-tempo and hopeful summer energy served by all the artists, and the inflatable chairs provided by the festival meant that fans were able to relax fairly comfortably throughout the day when they weren't on their feet dancing and cheering.

The K-Pop lineup managed to spotlight many artists who had never been to UK or European shores before, and it was a shame that Billlie, a girl group originally scheduled to open the Saturday lineup, was unable to attend due to two members contracting COVID-19. However, the entire day had something for every K-Pop fan, and was also a fantastic introduction to the genre for casual listeners, with the well-selected mix of legendary, newer and lesser-known acts truly showing the variety of K-Pop 'Made In Korea'.

Update, 5th August, 2022: the article has been corrected to reflect the present number of members in Golden Child.