The second and final day of the MIK Festival 2022 in London exchanged K-Pop energy for K-Hip-Hop goodness.
Written by
Aimée KwanAugust 3, 2022 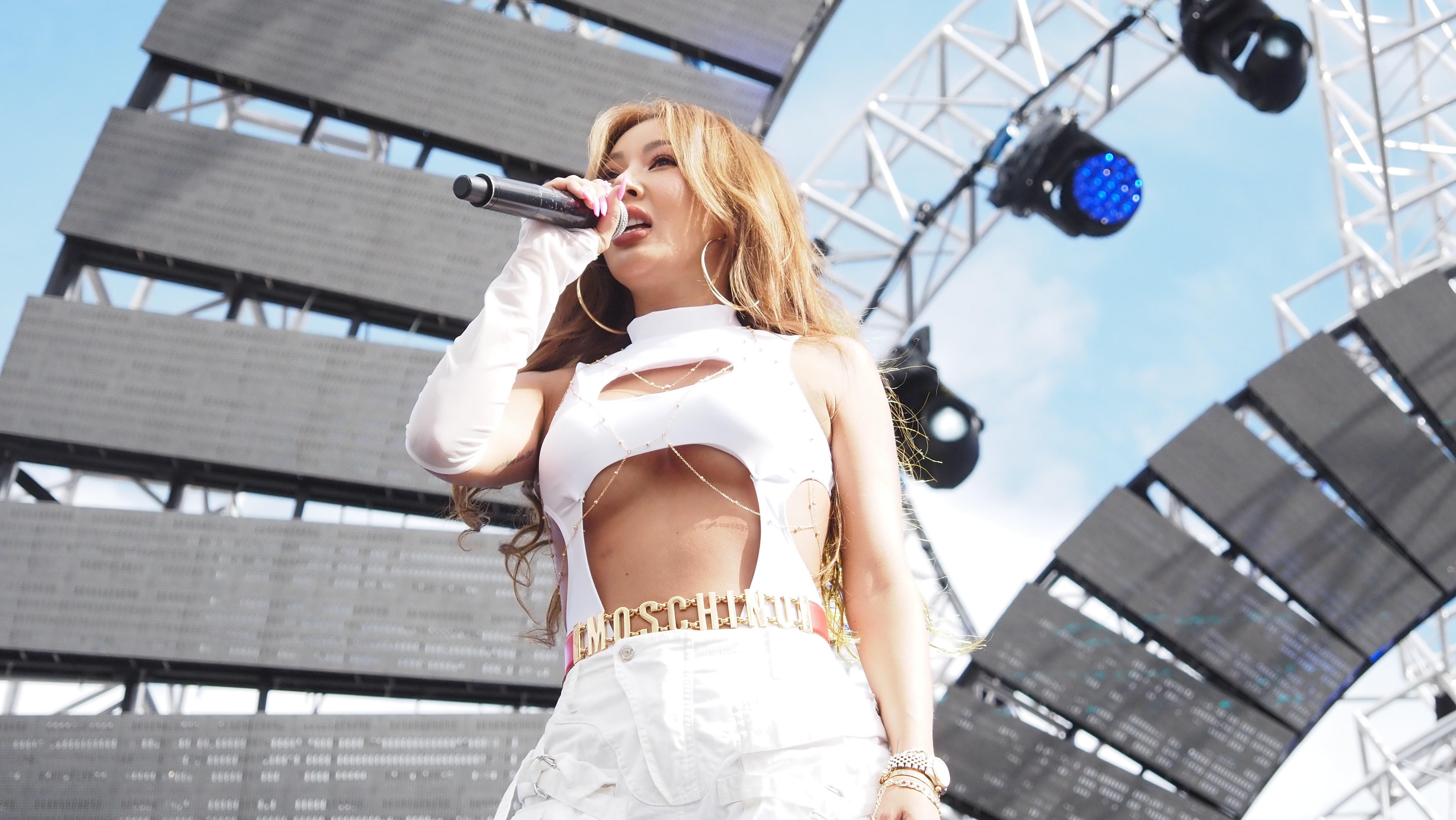 After a host of K-Pop stars took to the stage on the first day of London’s MIK Festival in Southwark Park, some of K-Hip-Hop’s best known artists lit up the city with a host of fun, vibrant and diverse performances on the festival's second and last day.

As the sun beat down on the crowd, rapper pH-1 kicked things off in a perfect fashion. Clad in a black shirt jacket, he returned to London for the first time since the pandemic by opening the show with a set that instantly got the crowd on their feet. Songs such as dance-R&B smash ‘Cupid’ and chill tracks ‘365&7’ and ‘Nerdy Love’ got the crowd in the perfect combo of relaxed and upbeat. He even brought some gifts for some lucky members of the audience, and gave out five signed CDs before he wrapped up his set.

One of the best sets of the day came by way of rapper and singer Jessi. Clad in a badass white ensemble, she got the crowds creaming with her hits 'Drip (feat. Jay Park)', 'Cold Blooded' and 'What Type of X'. Embodying the female empowerment and confidence that people love about her to a T, she also showed constant care for the audience, giving water bottles out to the fans who had been standing for hours in the heat.

She also had other non-music news to share, announcing that she would be returning to London soon for a pop-up for her upcoming beauty line and potentially more performances. She reminded the audience to have confidence in being themselves, as it took 18 years to get to where she is in her career. The rapper also shared that she didn't want to originally drop her iconic song ‘NUNU NANA’  because should thought it was too loud and that the final song in her set, ‘Zoom’, was written in just two days. The crowd sang along to her songs throughout the set (which overran, not that anyone was complaining in the slightest), and her close, sincere interactions with the audience were loved by all.

Headliner Jay Park also brought the house down, with a non-stop, adrenaline-filled set that featured songs such as ‘Forget About Tomorrow’ and ‘Me Like Yuh'. It was a party for the entire audience, with thousands on their feet not just for the moment he decided to remove his shirt, but also for the special guests he brought on stage. Some time after giving his female and male dancers space to showcase their amazing skills, he brought on pH-1 (who is signed to his label H1ghr Music) and rounded off the entire festival alongside Loco and Gray, who are also under his label. The one hour setlist also featured the song ‘Need to Know’ from his upcoming album, and his ability to turn the entire park into his own dance floor was truly something else. With the energy and skill he brought to the stage, he was a fantastic festival closer not only for Day Two, but also for the entire festival itself.

Loco and Gray also superbly showcased their individual sounds and colors to the festival-goers; the latter turned on the charm offensive to the delight of all, and showed off his signature groove and charisma through songs such as ‘Stay' and ‘In My Head’. He was also part of one of the funniest moments of the night, when he claimed a red bra thrown on stage would be too small for his own pectorals. Rapper Loco followed on from his label mate with another fun and energetic set full of personality. The rapper was interactive and cheeky throughout and his set featured a mixture of upbeat and more mellow tracks showing off his versatility whilst also allowing his witty manner to still shine through. The crowd when wild when both Loco and Gray appeared again during Jay Park’s set, just as they did when singer Lee Hi was brought on stage to sing alongside Gray and Loco during the latter's set.

After the bevy of rappers, vocalist Lee Hi chilled out the crowd with her signature brand of soulful music. Though she performed her upbeat, disco-esque hits ‘Red Lipstick’ and ‘Bye’, her slower songs showed off the true level of her vocal ability whilst also being some of the most emotional moments of the day. The rendition of her song ‘ONLY’ had members of the audience in tears and her gentle, easy-listening setlist was a great contrast to the generally more upbeat stages of the other acts.

With also two decades in the industry under their belts, Epik High brought old school hip-hop to the elated audience, and beforehand even Jessi herself (rightfully) called them some the OGs in the game. From their cinematic introductions to their lively conversation, the crowd had a great energy throughout their set. Songs like 'Fan' and 'Don't Hate Me' had the crowd jumping and cheering, and seeing the three-person group performing on UK shores felt like a special treat for both long-time and brand new fans of the genre.

Rapper DOK2 came out near the beginning of the day, following on from pH-1 and a brief DJ interlude, to bring no-holds-barred energy to the crowd with his brand of intense hip-hop and rapping alongside heavy beats and a bold attitude. His was one set out of a lineup that saw every artist full of confidence, self-expression and a genuine joy when it came to connecting with the audience.

The second day of the MIK Festival in London showcased some of the best artists in Korean hip-hop who might not be as well-known as their compatriots in the K-Pop scene, and yet are no less worthy of note. Passion was a common and well-appreciated theme throughout, not just from the artists themselves, but also from the fans who came to see them who filled up both the Golden Circle (VIP) section of the field and the general admissions area with constant cheers and relentless energy.

As K-Pop continues to be a global phenomenon that only continues to grow, the MIK Festival has helped highlight just why K-Hip-Hop deserves more attention and love given the diversity in the genre and the artists' collaborations with one another. During his set, pH-1 hoped that he might be invited back should the festival return again next year: if the crowd's unmistakeable responses for him and all the other artists in the line up are any indicator, K-Hip-Hop will be back in with force in the UK very soon.