&ASIAN’s ‘My Story’ series gives writers and contributors the chance to tell us about their lives and personal experiences with honesty and candor. Upon the launch of their project Take Your Place: A Celebration of BESEA Identity, creators Chris Poon and Steph Fung share what led them to put together this photoshoot.
Written by
Chris Poon & Steph FungJune 8, 2021 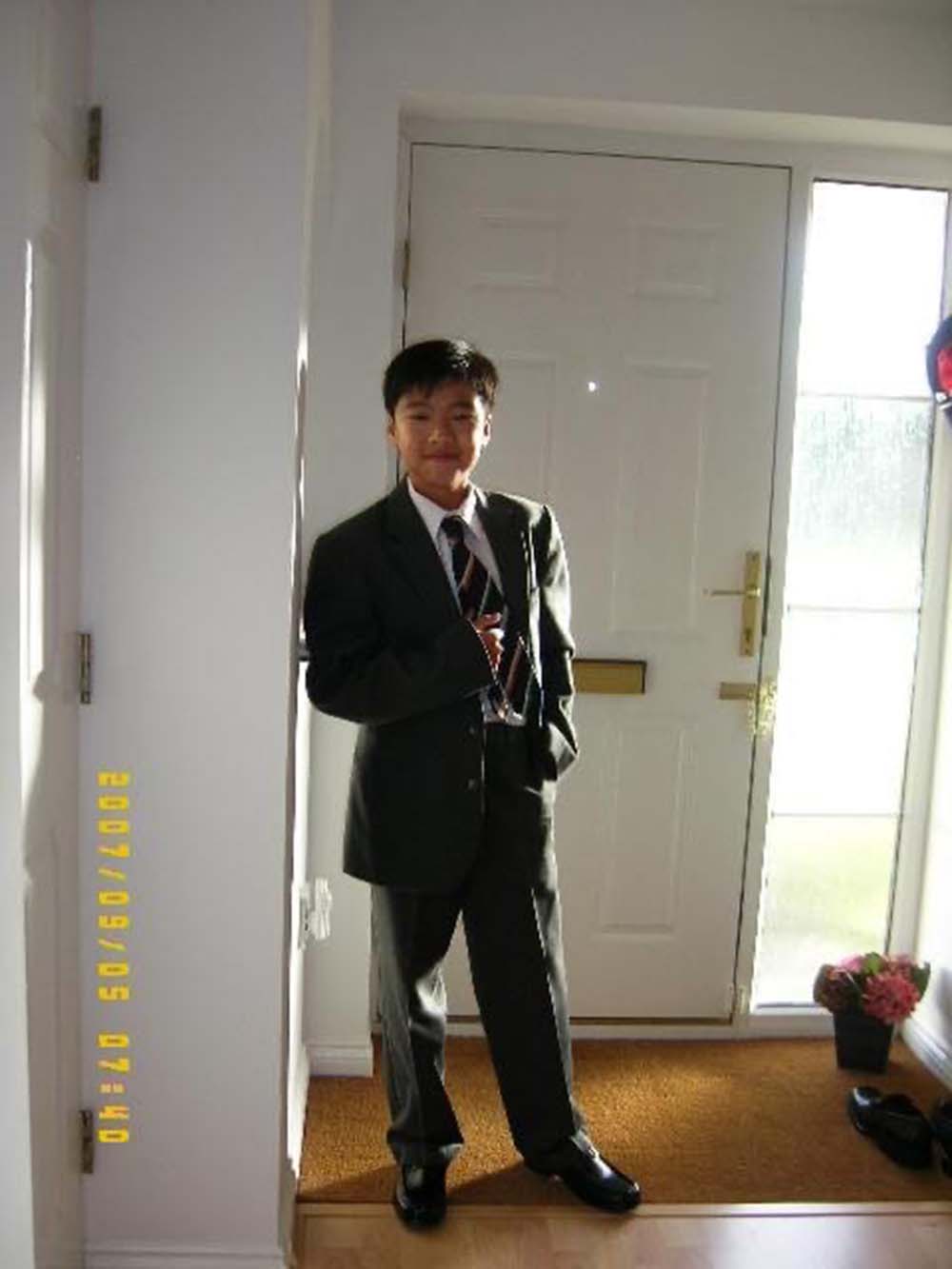 Hello: my name is Chris Poon and I am British-Asian.

It’s a little strange to see the two parts of my cultural identity together on any body of text that isn’t a government box-ticking exercise, because in truth, I have never truly attempted to come to terms with my identity until the past year.

I moved to the UK from Hong Kong with my mother and brother when I was nine years old, and have remained here since. My brother and I both hold British passports, not by virtue of the years we’ve lived here, but through us being born in the dying embers of Britain’s ownership of the city. In many ways, my background is not unique to the immigrant experience: a family relocates (in this case, from a former colony) and attempts to assimilate in society.

Growing up I didn’t have many Asian friends, but for the most part, it didn’t matter. I had a strong group of friends, and never felt denied any opportunities because of my ethnicity. The same happened when I was at university, save for a brief stint as a ‘model’ for the awkwardly-named Oriental Performance Society, I never felt the need to seek out others like me. I spoke in Received Pronunciation, was studying English Literature, and was also deep in the Musical Theatre society - I had never felt more British. I was content to leave the other half of my heritage to one side.

However, what I have come to realise in the years since is that it’s simply not possible to ignore this. For all the assimilating one can do, it only takes one instance to be reminded of your ‘otherness’. The first examples that spring to mind are typical microaggressions such as “no, but where are you really from?” and “you speak English so fluently for an Asian”. From there, things can turn violent. Take Jonathan Mok for instance, a twenty-three year old student at the time of his recent attack, who required facial surgery after being punched and kicked by a group of boys shouting “I don’t want your coronavirus in my country”. Admittedly, this is an extreme example of anti-Asian hate – an extreme that is worryingly becoming the standard – but it cannot be dismissed without acknowledging that this is the result of years of a lack of representation and misrepresentation of East and South-East Asians (ESEAs) in the media. Throw in a global pandemic that began in China, and suddenly people feel they have an excuse to target our community.

The idea of East and South East Asians being the ‘model minority’ makes them an easy target. As a child, I was taught to be polite, respectful, and never speak out of turn; just keep your head down, succeed and everything will be alright. This is directly echoed in how the media portrays ESEAs: the piano kid from School of Rock, Jing Hua in Bad Education. On the flip side of the nerd, you get the unattractive, ridiculous men and the exotic, over-sexualised women. Just look at all the ludicrous things Ken Jeong had to do to get a leg up in Hollywood as Mr. Chao (The Hangover trilogy) and Chang (Community), or the twins from Austin Powers in Goldmember named Fook Mi and Fook Yu, who couldn’t get a word out between their incessant giggling and fawning over Mike Myers. If you’re not a brainy, asexual nerd, then you’re a characture or an exotic object of desire. There appears to be little room in between these stereotypes. Even films that did a lot of good for representation like Crazy Rich Asians play to stereotypes of materialism within a vacuum of Asian people only interacting mostly with other Asians. There is even time to throw in the archetype of the Asian male pervert, complete with overgrown sideburns, round face and ill-fitting glasses. These examples only scratch the surface, but to contextualise this I reached out to Steph Fung, the founder of Asians In Britain, in March of this year.

She wished me to briefly share her story here too:

“Also from Hong Kong, I moved to the UK by myself at the tender age of thirteen for school. Although I have lived in the UK for the past eleven-plus years, I don’t consider myself a British-Asian, but more of an Asian in Britain as I am working in the UK under a work visa. To be honest, it’s a very complex and complicated feeling. Growing up as a third culture kid, I struggled with my identity and where I belonged. As an adult, I have slowly learnt to love myself, especially my Chinese name. I remember back in university, I was working in a bar and one of my colleagues asked me what my Chinese name was. When I told him how to pronounce it, he just laughed and told me how weird it sounded. It was a slightly traumatic experience and I became too embarrassed to tell others about my name from then on.

This was a repetitive issue growing up in the UK, when I faced subtle racism in school. I remember my English teacher trying to dissuade me from studying English Literature for A-levels because I’ll struggle with it as an international student and my Science teacher accusing me and my Chinese and Thai classmates of plagiarism because our project was too good to be written by us. This had a lasting effect on my mental health because it damaged my self-confidence and I doubted my ability to write for a very long time.

Asians in Britain was created out of simply wanting to give Asian people living in the UK a platform to share their stories and voice their opinions in hopes to empower and inspire the younger generations of British-Asian people. For the longest time, British-Asian people have not been properly and accurately represented in the media. It was also incredibly important for me to bring some positivity into the community through the stories of all the amazingly talented, ambitious, inspiring and wholesome people! It’s been three years since I first started the platform and it would be nothing without my amazing team of people who are just as passionate to create change as I am. I also have to thank my good friend Osvaldo Gloria who inspired and encouraged me to do this. I was very hesitant at first, but he told me to just do it because I would either regret it ten years later or I will see someone execute this idea.”

As much as the photoshoot was supposed to empower the British East and South East Asian (BESEA) community, it was most important to us that it humanised our models, by making a quasi-magazine profile for each of them. We put out an open call for volunteers, and found people who represented a variety of stories and backgrounds which shatter any stereotype– ranging from non-binary to cisgender, actors to accountants, and the full rainbow of our LGBTQI+ community. Our brilliant team was also made up of professionals who gave up their time to help: Vanessa Ng was our fearless photographer, Nana Andersen and Beatrice Birolo were our make-up artists, and Amna Saleem as our stylist. Prior to the shoot, we held a Zoom call to discuss our messaging and why we wanted to take part in this. While each model presented a beautiful and eloquent reason for their participation, I only had one intention. Simply put, I wanted them to look ‘shit hot’.

In total, 26 BESEAs gathered on a rainy May day on Brick Lane to produce this shoot, titled: Take Your Place: A Celebration of BESEA Identity. As the day progressed, it became clear that a community was being formed amongst the models and creative team. There was no talk of ‘fighting inequality’ or politics. Instead, the models and the team chose to exist as they are: a rich mixture of ethnicities, narratives and belonging; no parts of their identities diminished or amplified over the other. It is why the dress code was intentionally ‘non-Asian’, but a celebration of what made each individual feel empowered. It was a celebration of the traits, passions and differences that affirmed to each of us that the complexities and fractures of BESEA identity is something to be proud of, not a wedge to further divide and alienate. There was no deeper philosophical point to be made with these photos. Rather, the accompanying text to each model’s profile, meticulously edited by Steph from interviewing each person, speaks of the in-between that has been sorely lacking in media representation. ESEAs are just as fallible and imperfect as any group in society. However, we are just as passionate and joyful, and above all, human.

Steph and I often discuss what success looks like for this project, and always reach the conclusion that if one person saw those photos and it helped them to think a little differently about ESEAs, then we would be happy. If one person saw those photos and felt a little less nervous about going out, then we would be happy. With this photoshoot, it came from a place of love and not aggression. We launched the project as a series on Asians In Britain’s Instagram account on the 27th May, and received an overwhelmingly positive response. We are still featuring a different model’s story every day, and to read through each of them is incredibly heartwarming.

In some ways, a part of me is trying to make up for the years of trying to downplay or hide my heritage. I am very lucky to be in a career with a progressive ideology and a brilliant support network of family and friends. My hope is that the community we formed on that rainy May day can try and support those who don’t feel that way just yet. Without diminishing any other group in society, we are simply taking our place.

Chris and Steph’s project Take Your Place: A Celebration of BESEA Identity can be found on Instagram.