The six-piece's newest record captures the group's spirit to its very core.
Written by
Aimée KwanSeptember 15, 2022 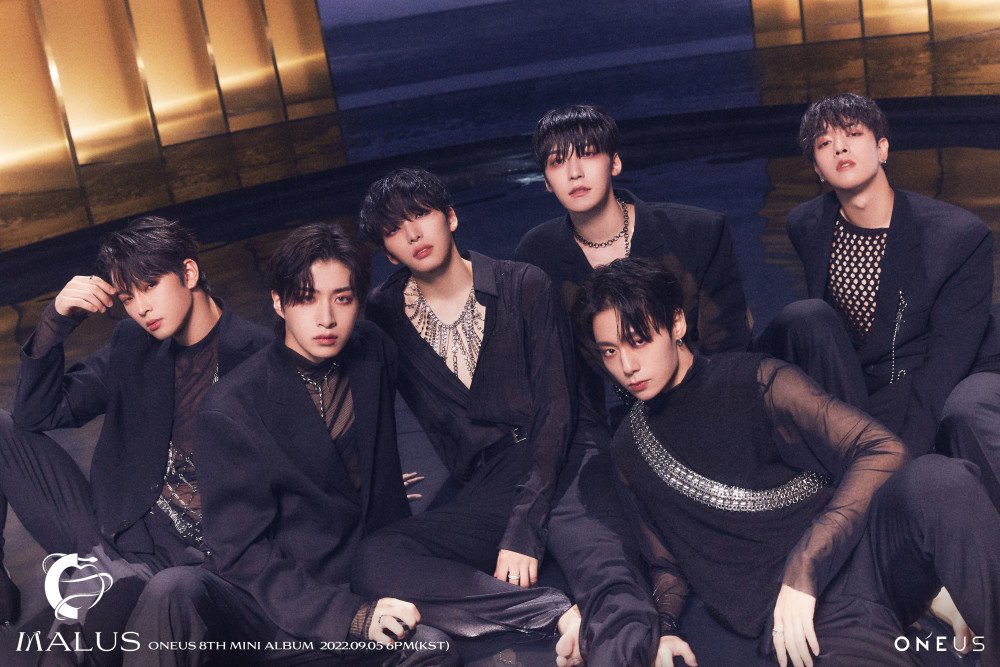 ONEUS have long been hailed as ‘concept kings’ within K-Pop. For those that might not know that means, it essentially boils down to this: no matter what storyline, theme or universe ONEUS are asked to inhabit, they are some of the best at chameleon-ing from one world to another in the industry.

Whilst this works for them superbly (especially when they perform live), those unfamiliar with the group might initially argue that ONEUS' easy movement between sounds and ideas could make them hard to place as artists. However, in their newest album MALUS the group show off why such genre flexibility is not a weakness, but is instead a strength when placed in their hands.

Newest title track ‘Same Scent’ recalls some of ONEUS’ more vintage title tracks, such as ‘A Song Written Easily’ and darker sophomore title track ‘Twilight’. The group have long since proven that they sit well within the mid-tempo electro-dance-influenced space, and the lack of heavy production on the song gives it a lightness that is refreshing to hear despite the song's poetically sad lyrics.

However, ‘Same Scent’ is not reflective of any of the other tracks in the album: in fact, none of the tracks in the album are like any of the others in any way apart from the fact that they are all the epitome of good quality, enjoyable pop. ‘Mermaid’ is a sparkling, mid-tempo retro bop that harks back to the 80s and provides a shot of summer sun as the autumn months roll in. By comparison, ‘STUPID LOVE’ recalls some of the best late-noughties to early 10s California rock-pop, complete with soaring guitar lines.

‘Gravitation’ is a straight-up ballad that showcases the group’s voices best out of all the tracks. Listeners should look out for the unexpected but classic sounding guitar solo  and member RAVN’s rap solo which beautifully interweaves with member Seoho’s power vocals. Helping to round off the record, ‘FULL MOON’ pulls the group (and the listener) into its intense R&B inspired sound. ONEUS have dabbled in R&B-pop sounds for a long time, and given the group’s intense energy, the genre always suits them well: ‘FULL MOON’ is no exception.

Diversity in sound is the name of the game when it comes to MALUS, yet the record does not come across as unfocused at all. Each track embraces its unique soundscape completely so that none of the songs falter in quality; if anything, this consistency is one of the biggest elements that threads through the entire record.

The album runs at an efficient 22 minutes including the English version of ‘Same Scent’ tagged on at the end, and clocks in at just under 19 minutes without it. The variety of genres explored works together with record’s consistency in quality so that the tracklist seems to zip by very quickly. It is easy to feel like you’re experiencing treats out of a chocolate box, with each confection providing a different experience to what came before, but with not a hint of whiplash in sight.

The vast majority of ONEUS albums contain such sonic diversity, but MALUS is one of the best albums (if not the best album) in their discography for those wanting to hear how and why this works for them. Whether it’s the feel-good pop sound in ‘Same Scent’, the rock vibes of ‘STUPID LOVE’, or the fizzy retro-pop fun of ‘Mermaid’, you’ll always be able to find something you love in ONEUS’ discography.

'Hallyu! The Korean Wave' At The Victoria & Albert Museum: An Exhibition Perfect For Fans & Newcomers Alike

The museum's newest exhibition celebrating the global reach of Korean popular culture is a rewarding visit for anyone already in love with it, and worthy of much exploration for those encountering the phenomenon for the first time.
by
Aimée Kwan

Yoojin Choi On Bringing The Hallyu Wave To Life

&ASIAN sits down with one of the curators of the newest V&A exhibition Hallyu! The Korean Wave, Yoojin Choi, to talk all things Hallyu, the essence of Korean culture, and much more.
by
Aimée Kwan

The multi-hyphenate sits down with &ASIAN to talk about Lollapalooza's expansion into India and the launch of her and her husband's new music label, Imprint Label.
by
Francesca Verceles-Zara