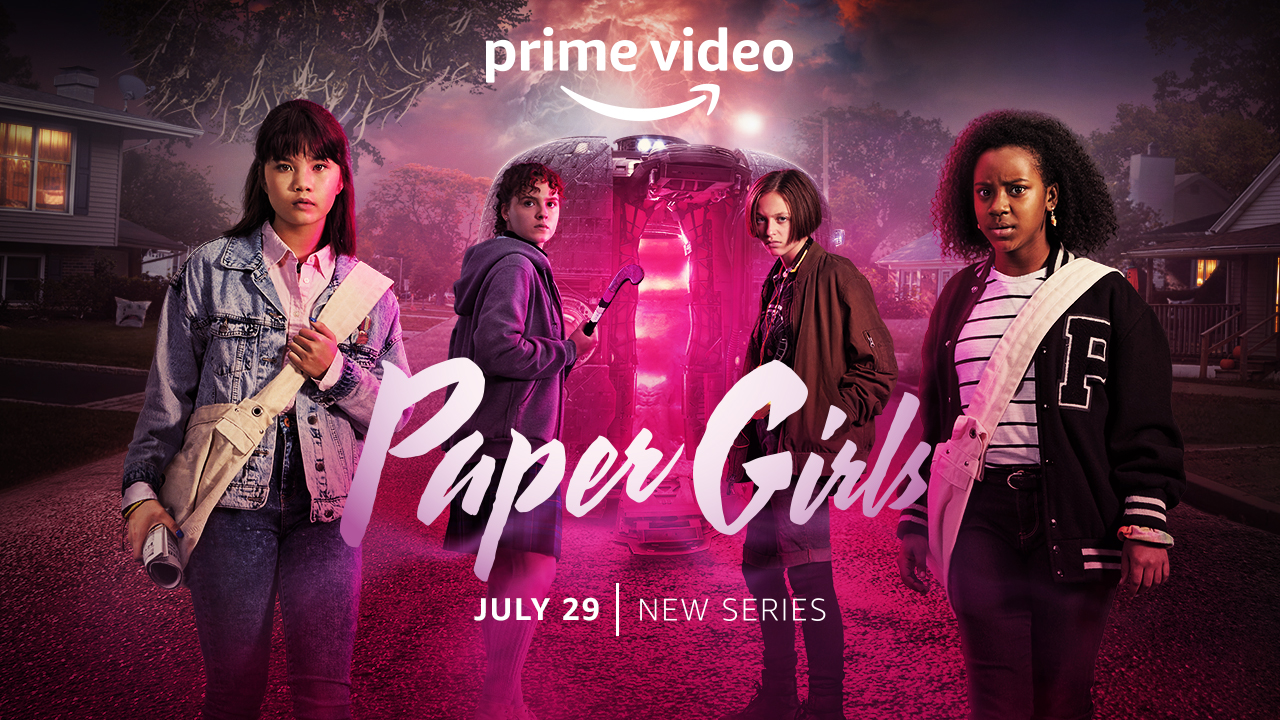 There are no major spoilers in this review.

We might as well get this out of the way: Netflix's Stranger Things took the image of a bunch of young kids on bikes in the 80s and somehow made it more of a thing than even Spielberg's E.T. did. To that end, there will be inevitable initial comparisons between the Netflix series and Amazon Prime's new show Paper Girls (based on the Image comic by Brian K Vaughan and Cliff Chiang of the same name). Both shows are set in the eighties, both feature a bunch of young teens with very little parental supervision on a sci-fi coming-of-age adventure, and you have said teens running around on bikes as eighties nostalgia kicks in. However, that is where the main similarities between Paper Girls and Stranger Things end, especially when you get past episode one, after which most of the bike-riding shots pass.

To be fair, the paper girls have to be on bikes: they're paper girls after all, and this is how the show's main characters of Erin (Riley Lai Nelet), Mac (Sofia Rosinsky), Tiffany (Camryn Jones) and KJ (Fina Strazza) are introduced to the viewer and interact as a foursome for the very first time. Nelet's Erin has just moved to the sleepy, out-of-the-way town of Stony Stream, and is taking up the paper delivery route for the very first time in order to help out her mother and younger sister. What she and her fellow paper girls don't bank on is being caught in the crossfires of a time-travelling conflict that pulls them out of 1988 and into the future.

The series follows the girls' attempts to get home, all whilst navigating their changing relationships with one another and with what they learn about themselves in the future. Each of the girls has a variety of different struggles that get brought to the forefront due to their time displacement. For the unruly, sharp-tongued Mac, it is her impoverished upbringing and her close relationship with her just as unruly sounding brother. For the highly intelligent, driven and talented Tiffany, it is coming to terms with the career and education biases that exist against African-Americans, no matter how well they excel. The wealthy and well-behaved KJ grapples with her sexuality, one that initially seems to be at odds with her position as the golden child in a well-thought-of Jewish family. New girl Erin is forced to confront the pressure and complexities around her Chinese upbringing when she meets the future version of herself (Ali Wong).

Yet even the above is a simplification of the different layers surrounding identity, family and friendships that the show touches upon. Whilst the first episode is mostly world building, as much for the audience as for the four main characters, it is in the following episodes that the show starts to dig into the interpersonal relationships that makes the show so compelling.

The original comic (that ran from 2015 - 2019) was a magical series for numerous reasons: the way it tackled even the most zany sci-fi time-travel plotlines in a way that still felt very real to life, its riveting portrayal of youth,love and relationships, and the stylised color palette utilised by Matt Wilson alongside the distinctive and captivating drawing style of Cliff Chiang.

The live-action show does not utilise quite same kind of vivid color palette as in the comics - although there is a nod to the comic's famous purple and pink soaked skies - but what it does not lose from the source material is how character driven the plot is. There is many a moment in the show where you almost forget the time-travel element of the show, such is the joy of just watching the four leads solving their predicaments and figuring out their emotions.

The show uses the concept of 'meeting your future self' in a manner that enhances or complicates the struggles already felt by the main characters. Knowing the future does not necessarily solve the problems faced by these teens, but instead makes them question who they wish to be: and whether that's something they're ready to face. For all the action in the show, one of the best scenes in the entire series involves them tackling how to use a tampon, and other scenes that hit hard are often intimately captured moments of dialogue and storytelling between the characters.

This unwavering emotional core is both a strength and a minor weakness for the show, for the great acting and dialogue between the main four keep the audience engaged throughout whilst being in stark contrast with how the time-travel element is sometimes explored a little clunkily. The motivations of the time-travel villains do not feel particularly weighty until much later in the season and aside from providing a further impetus for the awesome foursome to get home (as though being out-of-time isn't reason enough), their machinations pale in comparison to the various inner conflicts felt by the main leads.

Perhaps this should not surprise, for the way the writers do not water down or sanitise the female perspective is joyful to watch, and even just as a 'coming of age' story Paper Girls does justice to the myriad of social issues and tropes that it attempts to tackle. For these elements alone Paper Girls is well worth a watch, especially once you get past the first episode; the further into the show you get, the more you are rewarded. The end of the show is set up for a cliffhanger that will hopefully roll into a season two, and we already cannot wait for it to return.

Paper Girls is out on the 29th of July on Amazon Prime.