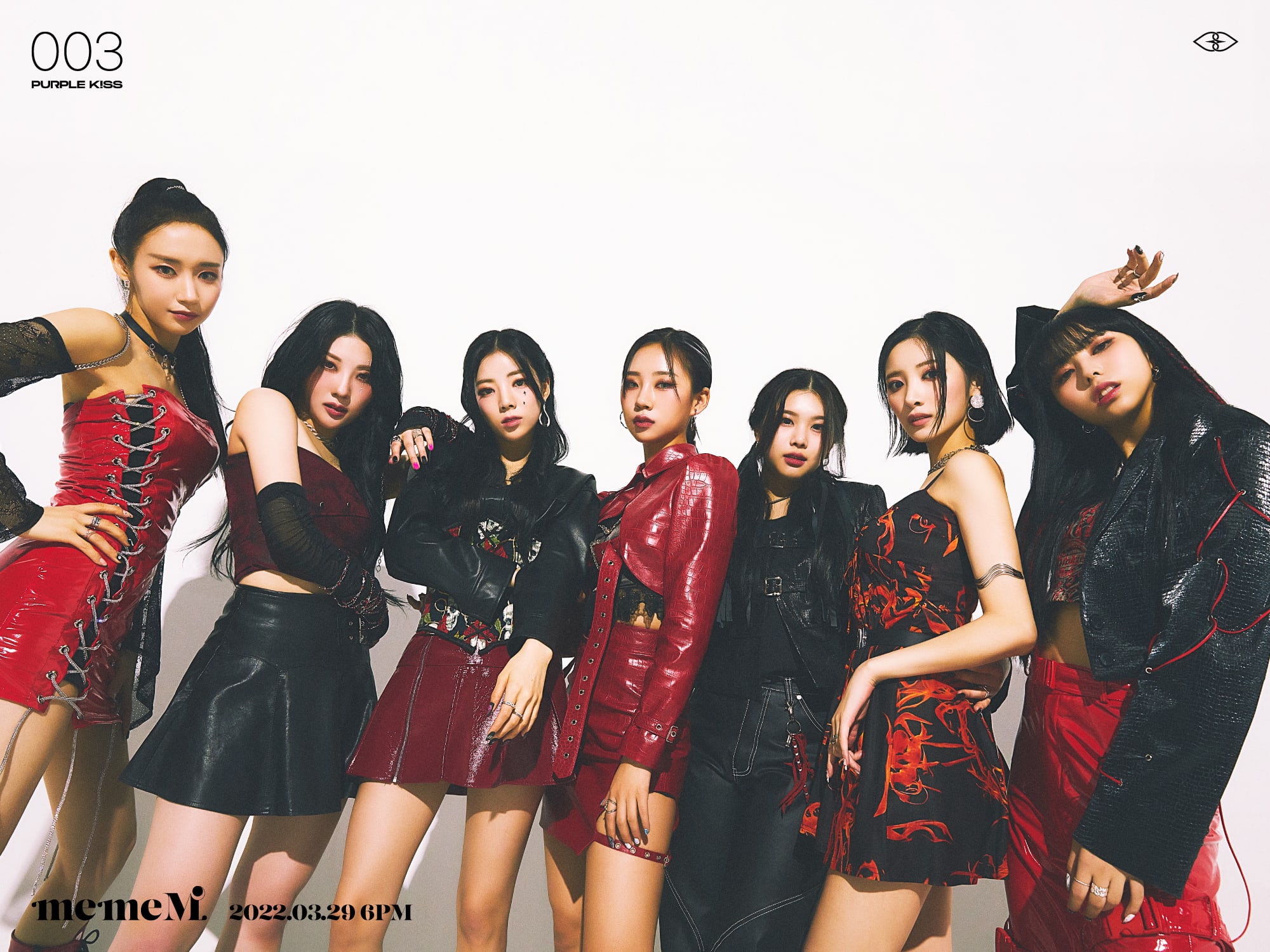 There’s a line in PURPLE KISS’ newest title track ‘memeM’ where member Swan sings ‘Purple is back, I’m gonna control you…’ as the group’s return to the fore after six months away since the release of their second EP Hide & Seek. Yet for those expecting another disco-pop hit in the vein of previous title track ‘Zombie’, their newest title offering is a different affair entirely, much like how this new album propels the group beyond their previous creative output.

‘memeM’ is nothing short of a power-pop track with a hype chorus and noise-esque beats that allow the group to channel more power and high-octane energy than they have done before. However, such intensity does not drown out the members’ abilities in the slightest: vocalist Na Goeun has never sounded better than before the track’s final chorus, and the second verse is a whole moment in and of itself, with Swan’s choosing a more breathy voice than usual to perfect effect.

PURPLE KISS’ vocal abilities across the group have always been stellar, and on the album’s B-sides the depth of their skills are given more space to shine. Ballads ‘JOAH’ and ‘Cursor’ and mid-tempo glitter bop ‘Oh My Gosh’ are perfect for listeners wanting to indulge in just how great it is to simply hear them sing, no bells or whistles or overproduction needed. Member Chaein is also credited as a lyricist and a composer on all these tracks and the group are in good hands with such a talented composer in their ranks capable of churning out such great songs so consistently.

‘Pretty Psycho’ is a groovy pop track that holds up as arguably one of the best tracks on the album, a little like if ‘Zombie’ and ‘Ponzona’ had a slightly sinister disco baby that you just can’t stop dancing to. It’s fun whilst leaning into the darker and more witchy concepts that PURPLE KISS have played with since their debut and more of this would not go amiss. By comparison, ‘Hate me, hurt me, love me’ is tonally the brightest song on the album, a noughties-inspired pop song that is perfect for the summer months with all the feel-good cheesiness its chorus exudes.

Since their debut, PURPLE KISS have been finding their footing, balancing out sounds that help show off the members’ artistic abilities with popular styles in the charts today. As a result, we’ve thus been treated to diverse albums from the group, with the generally upbeat stylings of Hide & Seek a fun progression from the group’s debut record Into Violet. However, in memeM, whilst this same diversity in style has persisted — see the contrast between hard-hitting ‘memeM’ versus gorgeously beautiful ‘JOAH’ — the group have hit a new level of consistency, with even their most experimental tracks sounding more polished and assured in their artistic direction.

The members’ abilities ground the album, from their vocals to their rapping, as well as at least one member being involved in the creation of every track. As a result, even though the latter half of the album jumps between ballads and upbeat tracks, the album still pulls together as a conscientious and sparkling pop record that becomes even more enjoyable upon multiple listens.

It seems Swan was right: purple is back.

memeM is out now. PURPLE KISS can be found on Instagram, Twitter and all music streaming platforms.