The five-member group mark being the first K-Pop group to play Lollapalooza with some signature fantastic performances.
Written by
Francesca Verceles-ZaraAugust 5, 2022 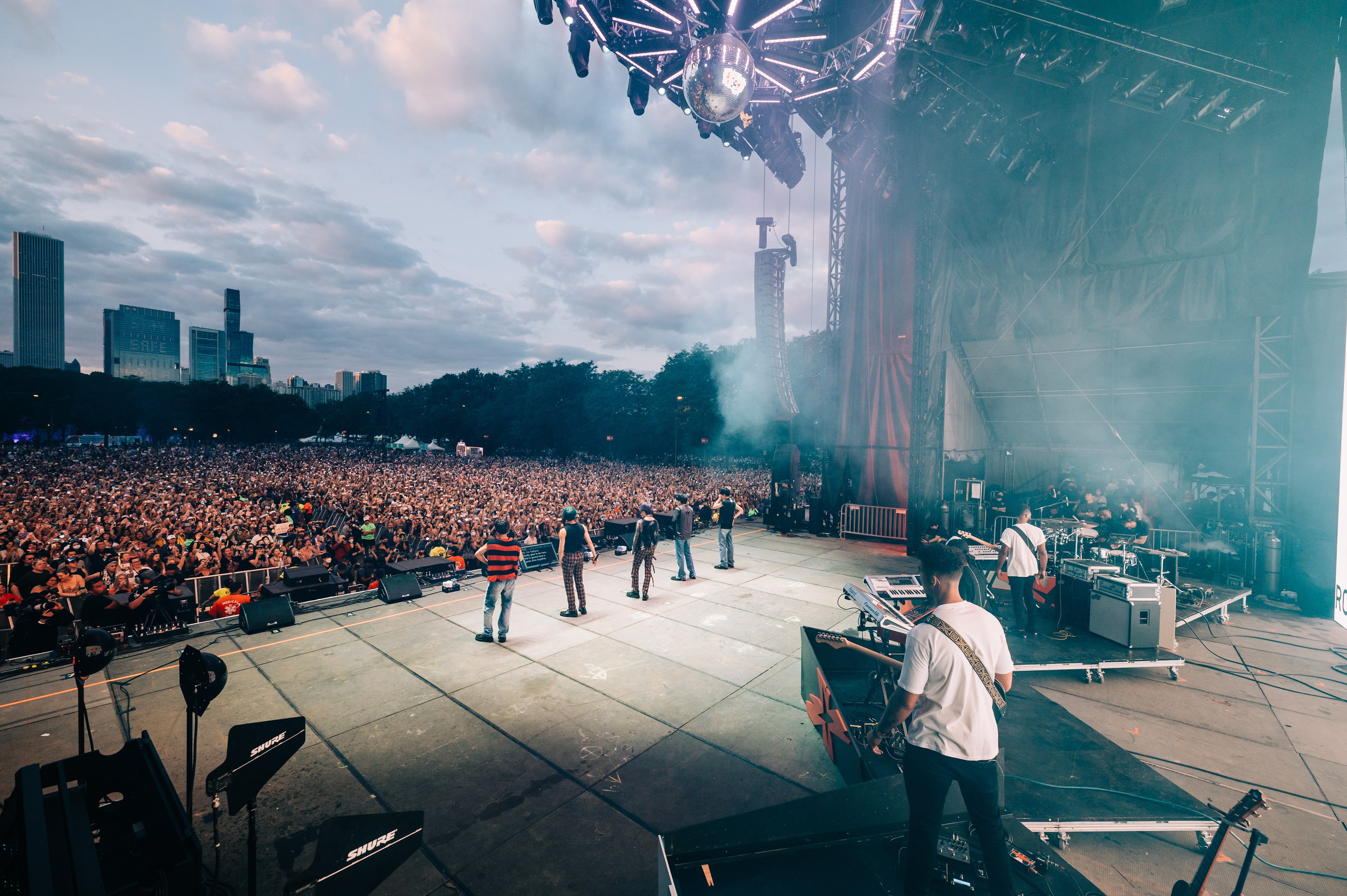 Being added to a large festival bill relatively last minute is no easy feat to deal with, but for three year old group TOMORROW X TOGETHER, they took the opportunity in their stride and made history by being the first K-Pop group to perform at Lollapalooza. Also serving as the last date of their North American leg for their world tour ACT : LOVE SICK, the group closed out a banger of a set at Lollapalooza on Saturday having their North American leg come full circle by ending it in the city that they started in: Chicago.

Having debuted in early 2019, TOMORROW X TOGETHER had limited exposure to live performances due to the pandemic; this weekend proved that despite their young age, the collective experience the quintet gained domestically in their home of Seoul via online concerts had prepared them for this moment. They carried themselves like veterans in the space, completely owning the stage that they had for their forty-five minute long set which left fans wanting more. Fans (also known as MOA) patiently waited at the Solana’s x Perry’s stage throughout the day for the group’s set, sitting through multiple fantastic artists and were rightfuly disgruntled at the fact that TOMORROW X TOGETHER’s set was cut short by a few minutes due to a delayed start.

Once the stage was set for the five-member group, the crowd buzzed with excitement as the beginning VCR played introducing the members of the group rolling into the title track of their most recent album minisode 2: Thursday’s Child’s title track ‘Good Boy Gone Bad’. The guitar riff at the beginning of the song was accentuated by the live band that supported the group throughout their set and brought forward the rock elements in their songs like ‘LO$ER = LO♡ER’ from their album The Chaos Chapter: FIGHT OR ESCAPE as well as newer offering ‘Thursday’s Child Has Far To Go’.

Upon the sound of just a couple of notes from the beginning of their song ‘Anti-Romantic’ the crowd immediately sang along. Fans and non-fans alike seemed to be familiar with the track as soon as it hit the chorus: “sorry I’m an anti-romantic” from when the song’s clip went viral on TikTok earlier this year. Much to their fans’ delight, TOMORROW X TOGETHER performed the song ‘Valley of Lies’, an English track that they had released a week ago, even going as far as flying in collaborator iann dior to Chicago for the special feature. This then led into another English track, ‘Magic’, whose poppy and upbeat sounds contrasted with the more mellow vibes of the previous song. The group then closed their set with ‘0X1=LOVESONG (I Know I Love You!)’ a song that fellow labelmate RM (of BTS) helped write. TOMORROW X TOGETHER left everything on the stage after performing their last track and as said before, the live band really does wonders to the rock-based instrumental and made the song resonate in your chest well after the set ended.

As ‘0X1=LOVESONG (I Know I Love You)’ came to an end, fans seemed to sigh in disappointment that the set had ended only after eight songs. The popularity of the group also seemed to be under anticipated by event organisers as the crowd was huge and the members certainly could have made the most of an even larger stage. All of this definitely proved wrong a stream on VLIVE – a streaming service where Korean artists can interact with their fans – the group held where members Taehyun, Soobin and Yeonjun were worried about whether or not festival goers would even come to their set.

Based upon the reactions of the crowd and the many watching online, they needn't have worried in the slightest. On the back of this stellar performance by TOMORROW X TOGETHER and the incredible turnout for the group, hopefully they’ll be back for more festival performances around the world.

minisode 2 : Thursday’s Child is out now. TOMORROW X TOGETHER can be found on Instagram, Twitter, and all streaming platforms.