In new song ‘My Universe’, both artists create a beautiful love letter of comfort to both fans and casual listeners alike.
Written by
Aimée KwanSeptember 24, 2021 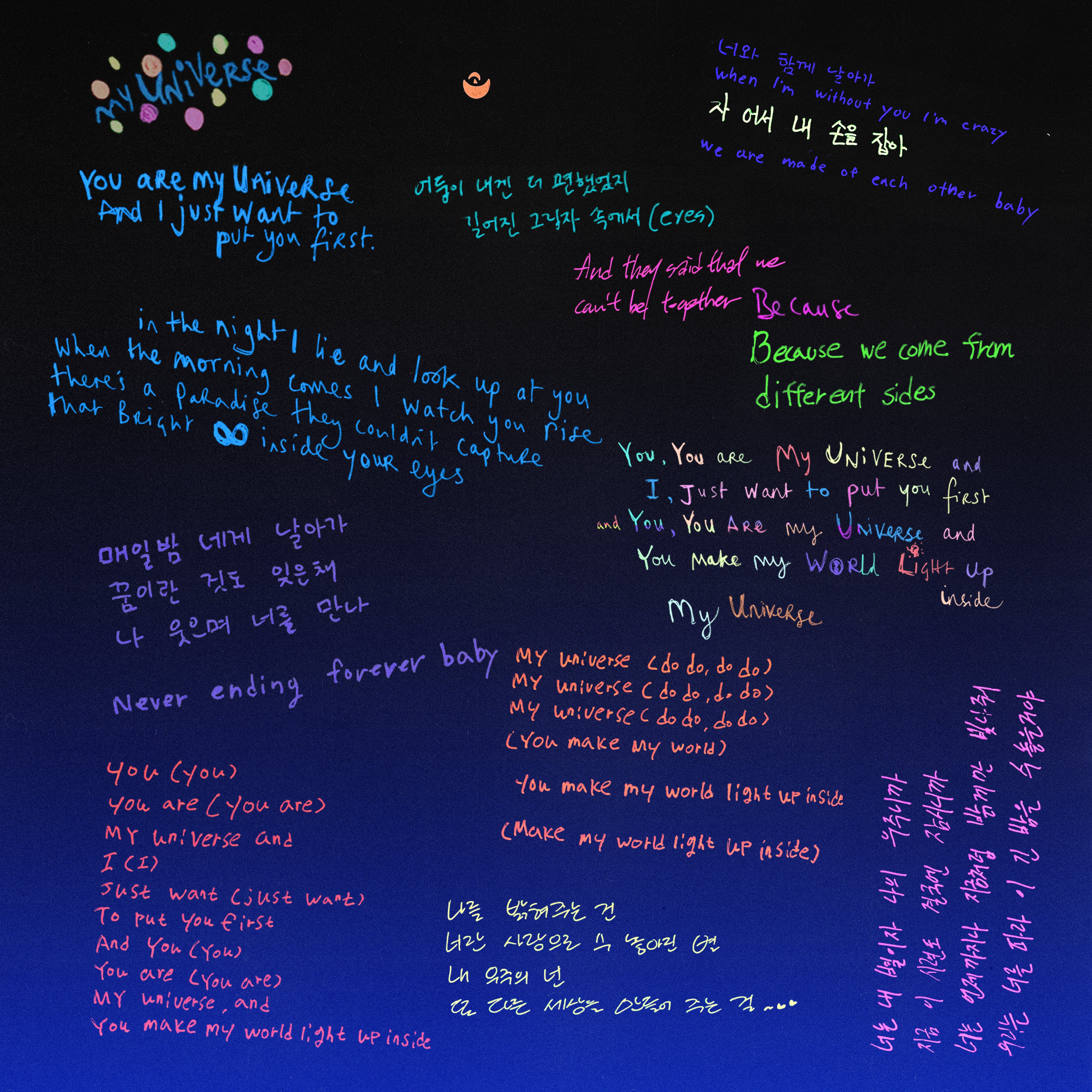 Some collaborations are so big that the expectation of its resulting art seems like it should be stratospherically unreachable. For Coldplay, a juggernaut of the English language music industry and BTS, the biggest Korean artist and boy group in the world, to collaborate on a song still seems so monumental that for fate to make it so surely suggests the existence of music gods somewhere.

The result of such an artist combination? A three minute, forty-nine second anthem that touches on themes of love, universality and togetherness that instantly reels you in instantly.

For most of us the pandemic has been a hard time, where the concepts of being yourself, having purpose and feeling connected to others have suddenly been brutally challenged. Some of us have lost family or friends. For others, livelihoods. Or perhaps we have simply lost ourselves.

‘My Universe’ is a song so clearly created with this in mind: from the song’s funky guitar line and gentle groove, all the way to the lyrics’ anthemic feel.

Its message is open enough to connect to any listener, and the balance between the English parts in the song and BTS’ parts in Korean is perfectly balanced. Some English-language collaborations with Korean artists can end up feeling shoehorned or sloppy, with a feeling of disconnect between the vision of the Korean artist and the English-speaking one.

Over their past few collaborations, BTS have managed this balance effectively, with their ‘Butter’ remix featuring Megan Thee Stallion, their ‘Boy With Luv’ single with Halsey and Suga’s feature on Halsey’s ‘SUGA’s Interlude’ all being particular highlights in their discography. The respect between BTS and Coldplay has been evident ever since BTS performed a cover of ‘Fix You’ on MTV Unplugged in February, and between this and both Coldplay’s consistency as a conscientious collaborator, it should come as no surprise that the song fits both artists’ styles well.

The utilisation of the softer and more mellow tones of BTS’ vocal range is a treat to hear and gives the verses a notable tenderness and contrast to the chorus which means that when we’re chanting along to it, every phrase feels like an emotional release. A special shoutout has to go to the seamless Suga — J-Hope — Jungkook transition from the bridge to the last chorus that gives all three moments in the spotlight that are both distinctive and yet magically feel part of the same journey. The collaboration plays truly as a piece brought together between both Coldplay and BTS, as opposed to two puzzle pieces forced to fit together.

As of writing, the song has hit number 1 in over 78 countries, and the Official Lyric video has over ten million views on YouTube. A music video by veteran music video director Dave Meyers is set to be released soon which will no doubt continue to capture both the imagination and the hearts of both artists’ fans. After all, if the expectations for the song were high, they have certainly been met with this Earth-defying anthem of survival and love. It would be a disservice to both artists to think that the music video might not also exceed any expectations set upon it.

When it comes to the pandemic, very few of us know when our lives will truly go back to normal; but as we wait and hope for things to improve around the world, ‘My Universe’ is an anthem that, for just under four minutes, can take you away from your troubles and truly make you feel like things will be wonderful. The day when Coldplay and BTS perform this track together on stage in front of a euphoric crowd will be a special one indeed.

At the beginning of the year, even the wildest of music lovers probably wouldn’t have put a Coldplay x BTS collab on their 2021 music bingo card…

But hey, perhaps there really are music gods up there.