The five-piece group returns for the first time in 2022 with a new record full of artistic depth.
Written by
Aimée KwanMay 9, 2022 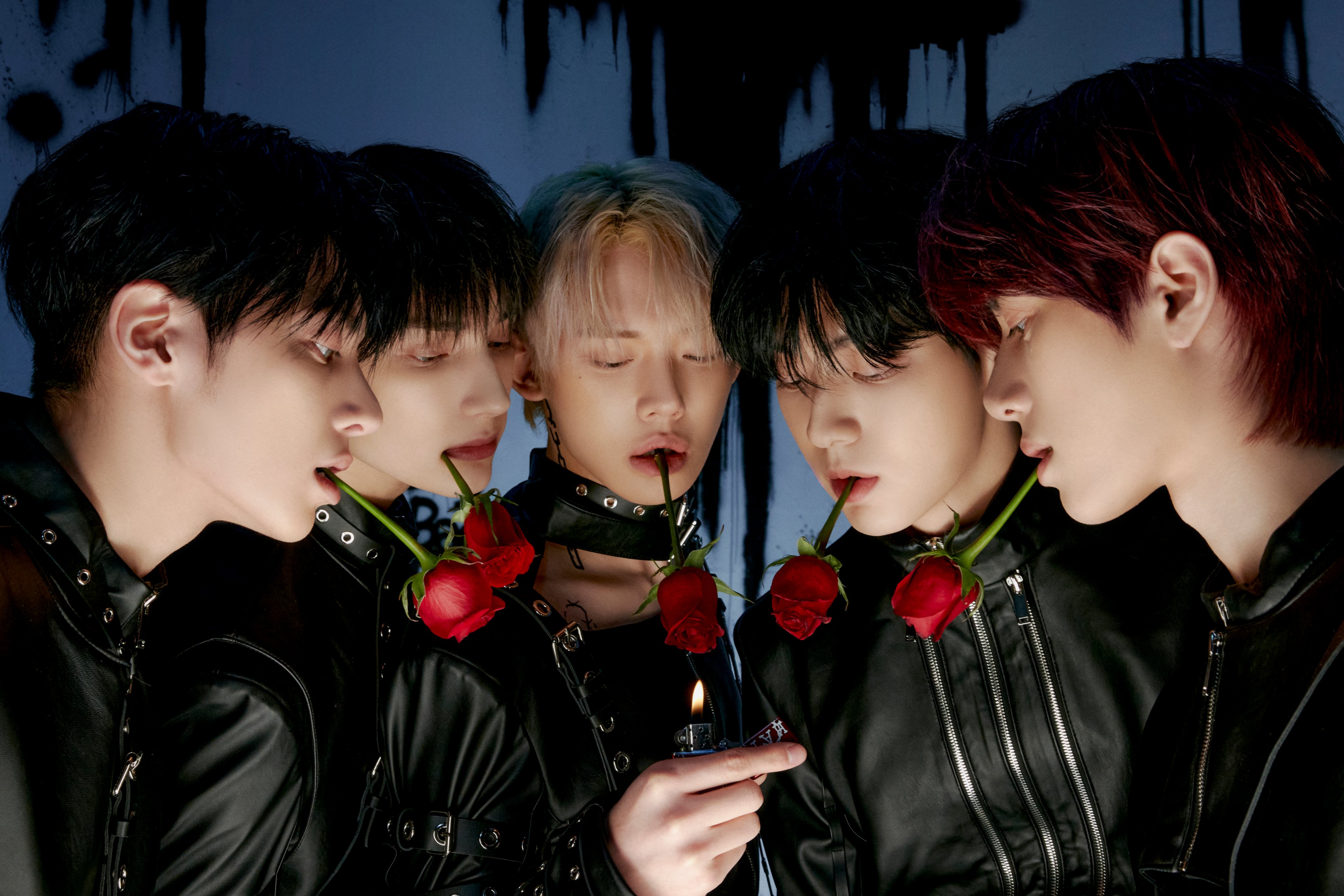 For TOMORROW X TOGETHER, 2021 was all about The Chaos Chapter, a critically acclaimed album series made up of the full-length album The Chaos Chapter : FREEZE and its repackage The Chaos Chapter : FIGHT OR ESCAPE. It was an angst-filled, eclectic, and polished follow-up to their debut album series The Dream Chapter, and helped the group’s star rise even higher. Yet in 2020, the group released a little interlude of a mini-album between the two chapters called minisode 1 : BLUE HOUR. Short but sweet, the album spawned one of the group’s best title tracks (which is saying something) ‘Blue Hour’, as well as other dreamy bops such as ‘Ghosting’ and ‘We Lost the Summer’.

So when the group announced that their first record of 2022 would be called minisode 2 : Thursday’s Child, it’s easy to see why anticipation for this album went through the roof. However, just as The Chaos Chapter was by no means a rehashing of The Dream Chapter, minisode 2 by no means treads the same ground as minisode 1.

The album’s title track ‘Good Boy Gone Bad’ makes this more than clear from the get-go. A hip-hop-inspired pop-rock song, its addictive beat seems to mimic the speed of one’s heartbeat when filled with the kind of overwhelming emotion and anger that the group conveys in this breakup track. The music video is also not to be missed: the group are at the angstiest they’ve ever been in their career, which each member conveying different sides of despair, passion, and then some.

The album also features the group’s first-ever unit songs, with ‘Lonely Boy (The tattoo on my ring finger)’ featuring only members Yeonjun and Hueningkai, whilst ‘Thursday’s Child Has Far To Go’ is performed by members Soobin, Taehyun and Beomgyu. The former song is a chill R&B ballad, with Yeonjun and Hueningkai’s vocals complimenting each other well atop a pretty guitar instrumental. ‘Thursday’s Child Has Far To Go’ is arguably one of the best tracks on the album, with an eighties-esque synth opening that blends into a rock-pop instrumental that feels both fresh and joyfully escapist.

The record’s other tracks ‘Opening Sequence’ and ‘Trust Fund Baby’ are no less notable; ‘Opening Sequence’ is a dark hip-hop ballad that shows off the group’s vocals as they soar atop the piano-based instrumental. For listeners that loved the ballad ‘Anti-Romantic’ from The Chaos Chapter, they won’t find themselves disappointed by its newer, even more overtly emotional sister. ‘Trust Fund Baby’ connects directly back to the group’s previous title track ‘LO$ER=LO♡ER’, with references to being a ‘Lover with no $ dollar sign…’. It is perhaps the tenderest, but also the saddest track on the album, as the group croon over a sparse but glittering instrumental about how they have ‘An empty wallet and a heart that is more empty than that…’.

Despite the emotional depths the group take us on throughout the album, minisode 2 : Thursday’s Child comes across as the group at their freest yet, and the album’s tracklist ending on the beautiful and positive note that is ‘Thursday’s Child Seems Far To Go’ seems to underline this further. MOAs (the name for their fans) in particular will enjoy noticing more acoustic elements and hip-hop/R&B in this album, which leans further into sounds and genres that members have expressed enjoying before. Four of the members are credited at different points on the tracklist: Yeonjun and Taehyun appear three times on the production credits, whilst Beomgyu and Hueningkai appear twice. The group have built up their production involvement more and more in every record, and it pays off given how much more this album extends the limits of their sound.

Six records in (a reminder that time truly flies when you’re having fun), and TOMORROW X TOGETHER truly seem to revel in surprising fans with new sounds and sides to themselves that they have not displayed before. minisode 1: BLUE HOUR did a great job of heightening the dream-pop effects of The Dream Chapter whilst also teasing the greater depths to come in the group’s next chapter. minisode 2 : Thursday’s Child has a similar effect, heightening the new edge the group had uncovered in The Chaos Chapter whilst bringing a shot of something new to their discography that teases where they may foray next. Although today is all about minisode 2, listening to minisode 1 and minisode 2 side by side helps to highlight how much the group has artistically grown in just under two years not just as performers, but also as creators of their own work.

Thursday’s child might have far to go, but TOMORROW X TOGETHER seem determined to make the journey nothing short of great.

minisode 2 : Thursday’s Child is out now. TOMORROW X TOGETHER can be found on Instagram, Twitter, and all streaming platforms. All translated lyrics are from lyricskpop.net