The New Earth Theatre’s latest venture bridges Japan and Britain and builds on bringing BESEA stories to the forefront.
Written by
Aarabi BaheerathanMay 5, 2022 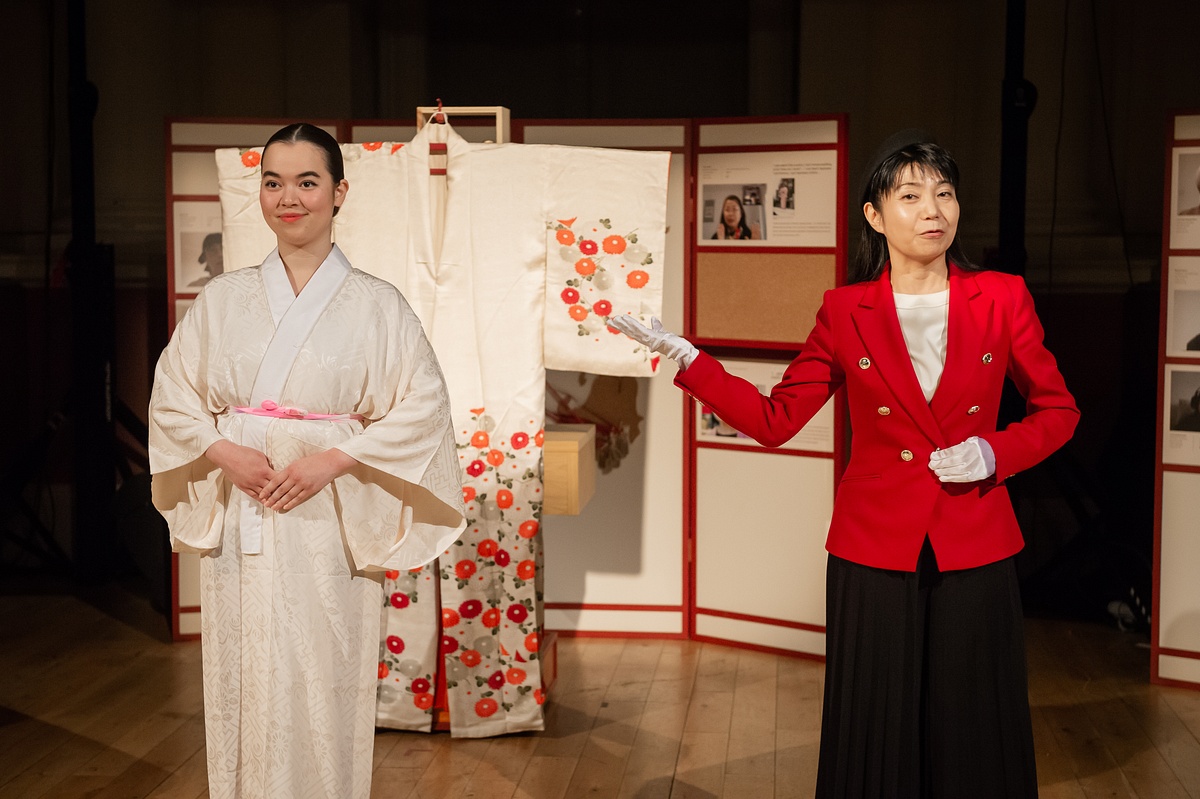 Created by Kumiko Mendl and Kazuko Hohki, Tsunagu/Connect Live is a performance that is innovatively immersive. Part exhibition and part performance, the show comprises a four-woman cast, who act as tour guides, taking us through the various eras of Japanese diasporic identity; from the Shōwa era to modern-day immigrant dilemmas.

Expanding on the 2020 project that saw over 30 interviews with Japanese women living in the UK being carried out, Tsunagu/Connect portrays migrant women for the multi-layered, complex individuals that they are, moving away from subservient, one-dimensional stereotypes that have plagued Japanese women. What is striking about Tsunagu/Connect, is that we are presented with a display of multi-faceted women that is entirely Japanese in its focus, yet still renders a profoundly universal portrayal of immigrant narratives.

There is a prevalence of Japanese dialogue, with no translation, but those of us who do not speak the language are still able to follow through context and body language. The performance masters the rare ability to maintain authenticity whilst still being both perceivable and relatable.

A particular highlight was the ‘colour-blind dating’ scene, in which a Japanese woman goes on a dating game show, where contestants are hidden from each other. Familiar stock-figures of racial fetishism such as the anime-loving nerd and the overly confident ‘finance bro’ make an appearance, whilst the segment cleverly questions the audience’s own subconscious preconceptions.

Tsunagu/Connect offers awareness and insight into the history of the Japanese Diaspora. One scene, powerfully acted by You-Ri Yamanaka, shows a poignant glimpse into her journey to Britain on HMS Empire Windrush in its final voyage from Yokohama, Japan, in the spring of 1954. The ship is generally known for its voyages from the Caribbean basin, so this scene is potent and enlightening for audiences. This vignette also challenges the stereotype of the ‘Japanese’ wife that marries an English gentleman. Instead of portraying this union as a contractual, one-sided affair, the scene presents true love and romance, and shows what happens to the Japanese wife in her old age, widowed and alone in her host country without the partner that brought her there. Spoiler alert: she is still a complex and individual person, that has lived her own life and has her own feelings.

Taking recent news into account, one scene is especially cathartic. Initially taking form in a Japanese silent film with a Benshi, a performer providing live narration, the scene illustrates Visa and immigration status struggles, ending with the women rallying together to shout “what the fuckity fuckity fuck”. The swearing here not only challenges the subservient, polite stereotype, but is also surprisingly uplifting. As the characters chant profanity in exhaustion at how contradictory and racist Heathrow airport border force can be, anyone feeling that frustration feels a definite release - noted by the audience’s particularly loud applause here - and are tempted to join in.

Tsunagu/Connect Live offers immersive, comedic, and poignant vignettes of women that feel entirely real. The hybrid-exhibition element is clever and educational, blurring the lines between art and history in the way the best performances do. With a simple scan of a QR code, the audience can access audio interviews with several women, meaning the show does not end when the performance does; Tsunagu Connect is an experience that continues to give.

Read more about Tsunagu/Connect and projects by the New Earth Theatre here and here.