In the feature directorial debut from Academy Award-winner Domee Shi, Pixar have released another emotional, sweet and complex story, this time exploring teenage growing pains through the Chinese-Canadian experience.
Written by
Aimée KwanMarch 8, 2022 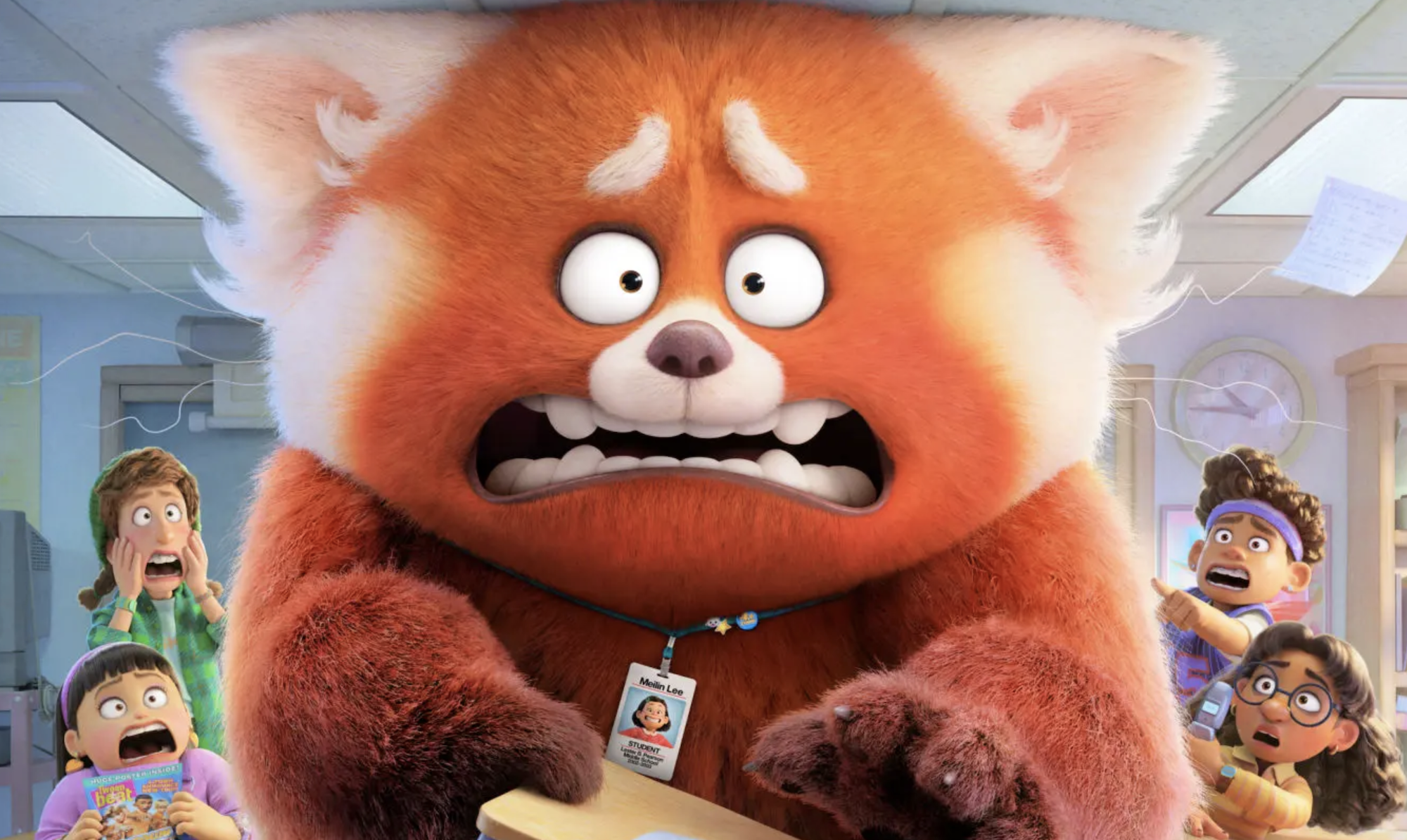 In 2018, Domee Shi's short animated film Bao was a cultural moment; a moving eight minute short that explored food, family and Chinese culture in such a way that audiences cried and smiled in equal measure. Clearly, the Academy of Motion Picture Arts and Sciences loved it too, and in 2019 Bao won the Oscar for Best Animated Short Film. Thus, it makes more than perfect sense for Pixar's first movie starring an East Asian lead to also be helmed by Shi. The premise is charmingly simple: 13-year-old Mei (Rosalie Chiang) finds she turns into a giant red panda when her emotions are out of control and Shi herself has said, it's 'kind of like 'The Incredible Hulk', but cuter'. Yet, as with Bao, Shi's newest tale uses her concept to explore multiple themes, and as a result Turning Red is a highly complex, often deeply heartbreaking and layered story about not just the chaos of ones teenage years, but also how this is affected by the immigrant experience.

The movie follows Mei as she discovers her shapeshifting ability for the first time, and explores her relationships with not just herself both in human and red panda form, but also how these new abilities change the way she relates to her her friends and her family: most notably, with her mother Ming (Sandra Oh). Set in 2002, the movie plays on the Y2K nostalgia going around these days, whilst also cleverly avoiding the need to explore how a girl turning into a red panda would become an internet phenomenon in a few hours if the movie was set today. It is also indicative of how Turning Red is inspired by the childhood of writer-director Domee Shi, with many little details surrounding growing up in the noughties - the Nokia brick phones, virtual pets and home burnt CDs - here to make nineties and early noughties kids smile.

It is also notable that Shi also chose to set the movie in Toronto, a city with a high Chinese immigrant population and a diverse immigrant population in general. The cast of characters reflects this diverse society well, as between Mei’s friends, the kids and adults at her school and the members of fictional boy band 4*Town, diversity exists beautifully within the film just because, without any sense of virtue signalling.

As was noted by audiences when the trailer dropped back in November 2021, there are elements of the story that initially seem to play into East Asian stereotypes - the harsh, overbearing mother and the passive father, the idea that Asian students are perfect overachievers under a lot of pressure, to name a few - but instead of using this to create a one-dimensional caricature of the Chinese community, the movie explores both the real consequences and reasons behind these social phenomena. Even the movie’s boyband, 4*Town, serve more significance in the movie than just being a nod to noughties boy bands like the Backstreet Boys and N*SYNC. Mei and her friends' attachment to 4*Town becomes an important motivator for their actions, whilst also representing how young girls’ devotion to popular celebrities are often derided and looked down upon by adults without recognising the emotional impact or importance of such figures in these teenagers' lives.

Mei’s conversion into a red panda represents so many different aspects throughout the movie that it’s a wonder Domee Shi is able to touch upon them all within such a short space of time: from how Mei allows herself emotional freedom or exploration, the changes girls go through when puberty kicks in, how certain elements of one’s ethnic heritage or culture must remain hidden (or not) in order to be accepted, to how female strength is sometimes hidden or converted into something ‘palatable’… but to mention a few. It takes multiple watches of the movie to truly appreciate the different social dynamics and self-identity Shi and screenwriter Julia Cho utilise the red panda to represent, and the way all of this comes together at the peak of the film's third act is both narratively satisfying and deeply cathartic.

Furthermore, despite the movie's bright and very noughties colour palette, it also deftly deals with the multitude of emotions and difficulties felt by not just Chinese, but also many other immigrant children. More than a stereotype, yet burdened by the pressures immigrant families have faced living in a secondary culture that sometimes makes you an easy target, confused and conflicted by parental expressions of love and care based on familial cohesion and tradition that oft exist at odds with the diversity of experience and points of view to be found in modern Western culture. That Shi and Cho have made such a concerted effort to explore this in a complex way within ninety minutes is admirable and the multiple tearjerker moments in the third act of the movie shows how gently their writing sneaks up on you and tugs at your heartstrings.

The film is also meticulous in its details concerning Chinese families, with many little moments that will make audiences members that have Chinese heritage or a familiarity with Chinese culture smile. The moment when Mei’s aunties pop up alongside Mei’s imperious grandmother (played by acting veteran Wai Ching Ho) is but one example: these aunties seem to step out of real life, from their handbags and footwear, to the fact they are enthusiastic about the free breakfast included in the hotel they are staying in. The chanting that appears in the movie is in Cantonese as opposed to Mandarin in reflection of the geographical origins of many Chinatown residents not just in Toronto, but in other Chinatowns in western countries, and the use of colour to represent the emotional states of the main female characters in particular is a wonderful little feature.

Note the green worn by both Mei’s mother and grandmother (representing health, sensitivity and harmony in Chinese culture) versus the red worn by Mei (representing both luck but notably… also happiness). Even the way Mei’s mother deals with her daughter’s worries versus her own past, her expressions of love and how she deals with Mei’s actions also speaks to certain cultural attitudes, and the way the movie manages to explore (however lightly) how and why these aspects exist helps these cultural elements be seen with some of the nuance it deserves.

Pixar has told us a mother-daughter story before in Brave (2012), a similarly heartfelt tale showing the conflicts to be found between mothers and daughters. But Turning Red is by no means a rehashing of this trope, as it also explores narratives around modern teenage female identity and puberty, immigrant identity and female empowerment, as well as some of the pressures put upon East Asian women by different cultures. Less than six months ago, Disney released Encanto, a beautiful story based on Colombian culture that captured elements of not just the Colombian experience, but also explored families and generational trauma in a way that also spoke to immigrant children and families around the world. One can argue that in Turning Red, Shi and Cho have done the same. The story is beautifully Chinese-Canadian, with so many little elements - from the food, to the clothing and room details - that connect you to the cultural origins of the creators. However, the heart of the story also grapples with how being a teenager can be messy, awkward and confusing, especially when your parents have their own thoughts about it all. We can all relate to that.

To tell the stories of young immigrants truthfully requires both the acknowledgement of the stereotypes that exist and a proper exploration of the reasons for, and consequences of such thoughts by people who understand these experiences first hand. With their track record, it makes perfect sense that Pixar and Domee Shi had felt themselves up to the task. In Turning Red, they have succeeded. More, please.

Turning Red will be out in cinemas worldwide on 11th March, 2022. Check out the interviews from our special Turning Red week here!