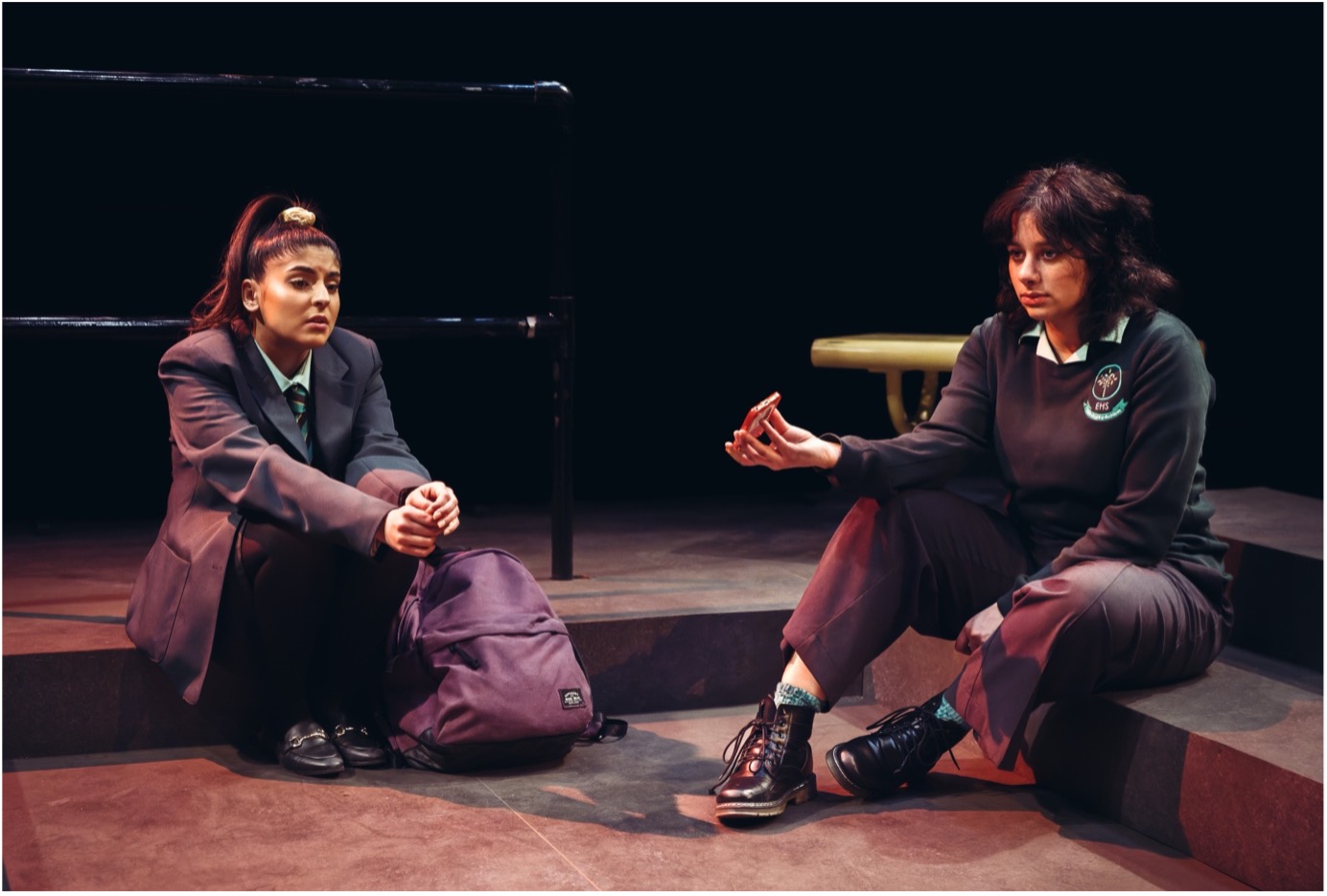 Directed by Nimmo Ismail (she/her), the play follows the relationship between two sisters – Bettina and Asha – that are wildly different in disposition. This difference is clear from the get go – Asha, with her ‘trans lives matter’ pin and her bag adorned with various activism badges, looks alternative and confident. Bettina, on the other hand, is squeaky-clean and juvenile, with a neat ponytail that bounces as she shuffles around her older sister.

Anoushka Chadha’s (she/her) portrayal of Bettina’s endearing naivety but unwavering stubbornness and persistence feels genuine. Safiyya Ingar (she/her, they/them) sparkles as Asha, putting forward a fierce passion that could only ever come from a paradoxically cynical but politically idealistic teenager. Ingar demonstrates this passion with ease and gusto, supported by her witty monologues, an occasional breaking of the fourth wall and a clever use of sound effects and lighting. The sisterly dynamic feels very real between the two, and true warmth is visible.

The primary characters are well thought out and multi-faceted, but Bettina’s naivety and compassion from the start feel contradicted by her hesitance to accept her own wrongdoings and her refusal to own up to lying.

The play perfectly portrays how children of immigrants often have opposing views to their parents and touches on the convoluted manner in which third culture kids learn to form political beliefs. For example, Gandhi being held above criticism in the eyes of older Asian generations, but Asha’s positive feedback on her essay that contained scepticism of Gandhi’s approach illustrates the way home influences can often counteract the curriculum and how young British Asians, like Asha, must process this alongside their ordinary coming-of-age dilemmas.

What shines is Bhattacharyya’s ability to fuse the words and teachings of B.R Ambedkar and Sylvia Pankhurst with a contemporary depiction of urban, British Asian life. In echoing the issues of caste abolition, classism and intersectional feminism around a modern classroom conundrum, the play uniquely reflects the way hybrid identity adds an extra layer of confusion to growing up. As Asha navigates her life between Pankhurst and Ambedkar, lamenting the way she has been taught and receiving a mixture of praise and criticism from both teachers and parents alike, we explore a third culture kid’s journey of self-discovery. As Asha’s own personal ideology shifts as she learns and experiences more, the audience is called to question their own beliefs. This introspective identity crisis is something so rarely represented in stage and screen, and Bhattacharyya’s play walks on this new ground with grace.

Another key highlight is the play’s portrayal of having to compromise on your beliefs due to power structures. As we learn that Asha’s mother sacrificed her own beliefs to avoid ridicule and oppression in a time where Islamophobia thrived, the audience learns, alongside Asha, that freedom of political thought is a luxury that minority groups do not always have. The references to Islamaphobia feel surface-level, alluded to but never fully explored. Nonetheless, this superficiality feels apt and intentional, as the Hindu sisters are in fact privileged outsiders in the matter – this would not be their story to tell.

Ultimately, despite some far-fetched parallels and awkward characterisation, Bhattacharrya’s play is graceful and eloquent in its inclusion of side-lined historical figures and in exploring the nuances of radical activism and British Asian identity. With excellent acting from its protagonists, the play is enjoyable and renders introspection.

‘Two Billion Beats’ ran at the Orange Tree Theatre in Richmond from the 5th February, until the 5th March. A livestreamed performance via OT on Screen is available on demand from the 8th to the 11th March 2022. Head to orangetreetheatre.co.uk for more information.