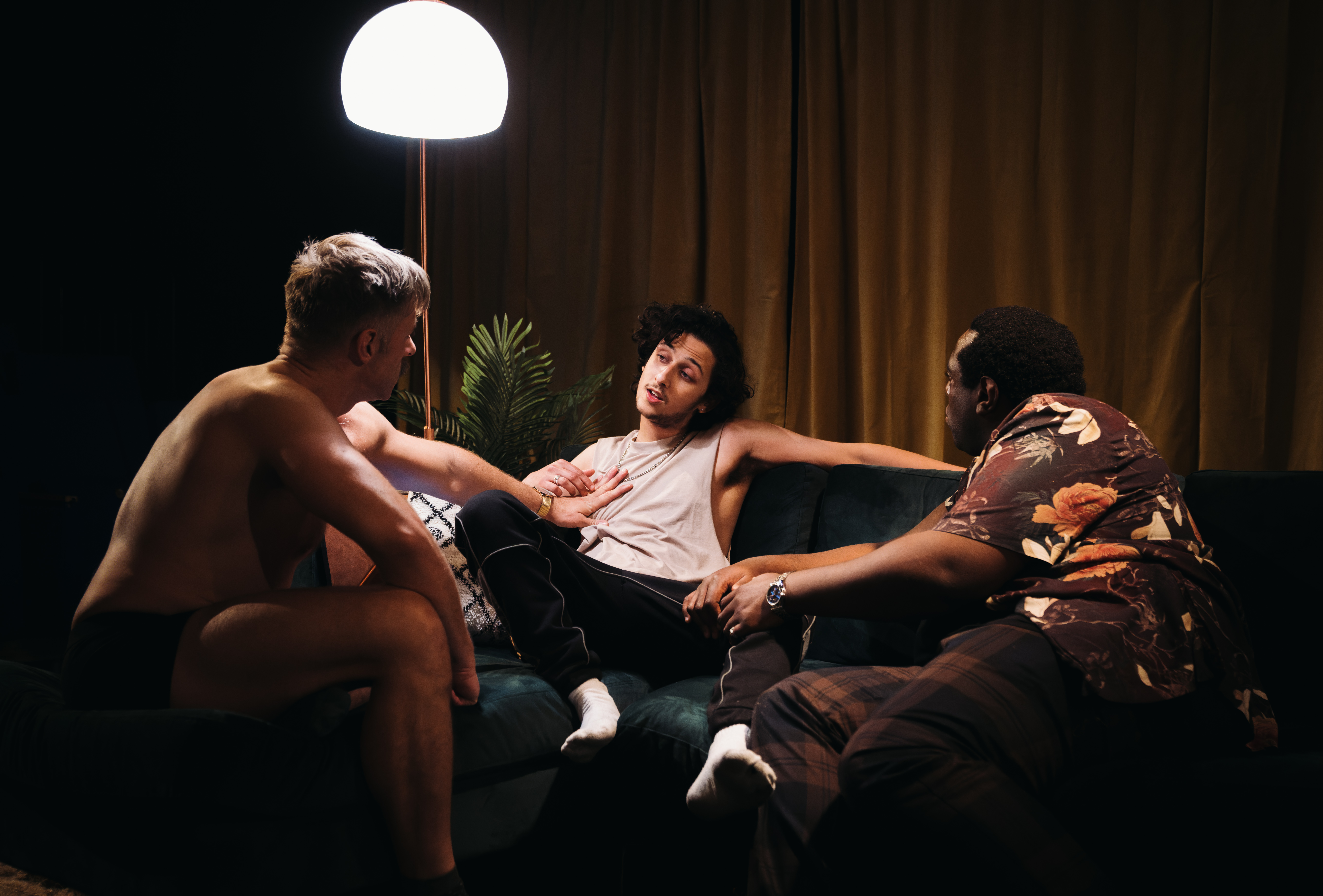 Known for his sold out previous plays Undetectable and My Dad’s Gap Year, Tom Wright’s ‘Very Special Guest Star’ takes us through a millennial gay couple’s decision to reignite the passion in their comfortable, suburban lives by taking a 20-year-old to bed. Sexy yet sympathetic, the story follows our trio of protagonists Quasim (Jonny Khan), Phil (Edd Muruako), and Michael (Alan Turkington) one evening after the couple, Phil and Michael, have encountered Quasim at the club.

Directed by Rikki Beadle-Blair, the mise-en-scène is simple but efficient. From the fashionable contemporary velvet green sofa, to the cocktail shaker that rattles along with the plot, the fantastic set design (by Natalie Johnson) feels all too familiar. Between the hanging couch caddy for tablets and remotes, and the clever use of the theatre’s real windows and window sills in the play, it really does feel like we’ve stepped into Phil and Michael’s living room and are sitting right there with them.

This simplicity does nothing to prevent the script’s harrowing plot twist; what begins as an indulgent experiment very quickly becomes a sort of reckoning for our protagonist couple, a confrontation of how our shortcomings can very significantly change the trajectory of another’s life.

‍‍The urgency to experiment takes form in the character of Michael, a fitness fanatic with an ironic determination to be uninhibited and audacious. It is Michael that highlights the couple’s struggle to the audience; “I signed up for a kid, not heteronormative suburbia.” His significant other, Phil adds balance and an awkward relatability, with his “dad bod” and his assertion that “there’s nothing wrong with being woke.”

The power dynamics shift so stealthily that the audience is left unsettled in our viewership, as we laugh, cringe and hold our breath throughout the hour and a half long play. Despite some abrupt changes in tone and occasional poetic monologues that feel somewhat out of place, the cast wonderfully executes these power dynamic changes.

Jonny Khan shines as Quasim, bringing further dimension to Wright’s excellently scripted character. He intimidates as the confident Gen Z with his MLE drawl and swaggering gait, but evokes compassion and insight with his vulnerability as a rejected and lost young refugee. With a slight softening of his voice, and a thickening of the middle-eastern twang in his accent, the seductive Quasim wavers from being assertively in control, to being implicitly exploited. The play excellently denotes the unequivocal role race and class play in London’s sexual sphere and the bigotry that persists within LGBTQ+ spaces.

It is these nuances that make ‘Very Special Guest Star’ very special indeed. Tom Wright’s script is poignant, brazen and comical all at once, and is done justice with superb acting from its cast.