Following the colossal success of its first season, Bridgerton returns for a second season with South Asian leads.
Written by
Aarabi BaheerathanMarch 24, 2022 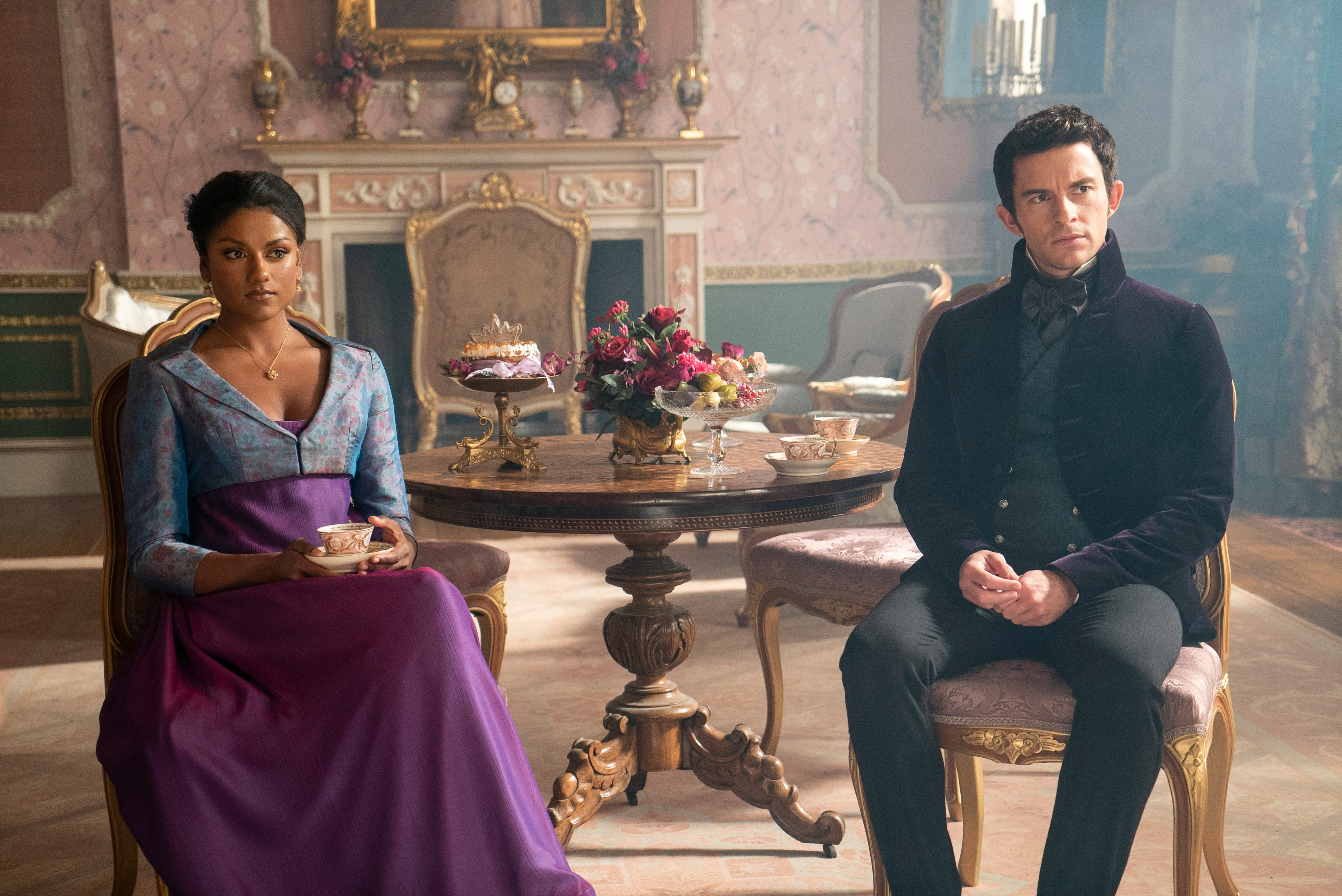 This review contains no spoilers.

Maintaining a pristine reputation, valuing familial duty above all else, and not being allowed to be around boys alone whilst simultaneously getting married and having children as soon as possible are a few of the shared expectations placed upon two very distinct categories: modern day South Asian women, and women in 19th century regency London. With such similarities, it’s surprising that we have had to wait until now to see an overlap between the two. But it’s here, and it comes in the form of Bridgerton Season 2.

Produced by Shonda Rhimes, the first series was watched by a record-breaking 82 million households, setting the stakes and expectations high for the second season. We at &ASIAN were lucky enough to watch the series ahead of its release on Friday, and despite some flaws and jarring shifts in tone, the second season is still a must-watch.

Based on the bestselling novels by Julia Quinn, each book of the series focuses on the romantic endeavours of one of the Bridgerton siblings, meaning the series has a quasi-anthology structure, with each season hosting a completed love story. Read more about what showrunner Chris Van Dusen had to say about this at the season 2 press conference here.

In stark contrast to Daphne, last season’s sought-after diamond, our heroine this season is Kate Sharma (Simone Ashley), a sidelined spinster from Bombay, entirely intent on finding a love match for her sister, Edwina (Charithra Chandran). Enter the familiar face of Anthony Bridgerton (Jonathan Bailey), who sees love as weakness and sees marriage as one more duty to check off his list.

“A pleasing face, an acceptable wit, genteel manners enough to credit a viscountess – it shouldn’t be so hard to find.”

Edwina is the perfect solution to his dilemma, but the only thing standing in his way, her sister Kate, proves to be a significant challenge. Bailey and Ashley are charismatic individually, but sparks fly when they’re on-screen together. They bring an earnest and sincere approach to the “enemies to lovers” trope, whilst emerging star Charithra Chandran brings a powerful duality of naïveté and self-assurance to the role of Edwina.

With a plethora of Emmy nominations and wins under their belt, the period costumes and hairstyling are just as impressive this season. Heavy is the head that wears the crown, but there are moments where the sheer height and breadth of the queen’s hair genuinely had me questioning the laws of physics. The instrumental covers are also back, including a string rendition of Harry Styles’ Sign of the Times by Steve Horner that’s ironically cheerful-sounding.

The romance is a slower burn this time round, with plenty of longing and tension that doesn’t quite get the satisfaction it calls for. This season is significantly less risqué and the scarcity of raunch is felt, but the almost-kisses and breathless yearning still warrant butterflies and keep us watching. Although the tension doesn’t reach the climax we’d expect (pun intended), this shift feels refreshing and endearing in the era of short attention spans and instant gratification, and pays homage to the genre of historical romance. There is still plenty of passion; it’s still urgent but more grounded. This season may even be possible to watch with your family (I would conveniently leave the room to put the kettle on for a couple moments in the last two episodes, however.)

With the novelty having worn off, Bridgerton’s flaws are plainer to see. A few of the sub-plots, particularly that of the Featheringtons, feel contrived. Lady Whistledown also appears to take a backseat; Penelope’s scenes lack the sincerity and candour we have come to expect from her. Regrettably, the series does appear to have revealed her identity far too early– not even the narration from Julie Andrews is able to resurrect the excitement the column merited in season one.

“That rather seems to be society’s flaw, not a woman’s.”

At its very core, the show is ultimately about womanhood, sisterhood and family as much as it is romance. The show’s best moments are found between its female characters, be it within the mentorship between the Queen and Edwina, in the childish friendship between Lady Danbury and Lady Bridgerton, or in the heartfelt sisterhood between Kate and Edwina.

What the second series lacks in raunch and steaminess, it makes up for thematically. Anthony’s sense of duty to his family and his traumatic fear of loss make him a far more empathetic lead than his predecessor, whilst Kate’s protectiveness of her sister nicely parallels this. Both have lost their fathers; both take on a leadership role within their families. The similarity between the characters is what causes the friction between them, and from this friction, there is palpable heat. We, as the audience, are rooting for them to finally do something for themselves.

If you, like me, are a South Asian girl that grew up watching period dramas, then Season 2 scratches an itch that we have had to ignore for years. I’m almost embarrassed by the sheer giddiness and joy I felt when I noticed Edwina wearing small jhumka or jhimikki earrings to accessorize her gown, or when I heard the protagonists calling their father Appa, when I saw the girls oiling their hair, and every time Edwina affectionately refers to Kate as Didi. There’s even a Haldi ceremony! Seeing India being referred to as “beautiful,” and the girls’ culture being portrayed as something entirely positive is a much-needed form of representation: South Asians deserve their place in escapism too.

Detailed representation aside, the elements of forbidden love, community stigma and generational trauma all make it all too relatable for, well, anyone, but especially South Asian men and women. Above all, for us hopeless romantics that have always fantasized of seeing brown, melanated skin in corsets, petticoats and silk gloves, Season 2 of Bridgerton is a long-overdue dream come true.

The entire second season of Bridgerton streams 25th of March on Netflix.